A man and his son have been arrested for allegedly killing a herdsman in Ogun state. 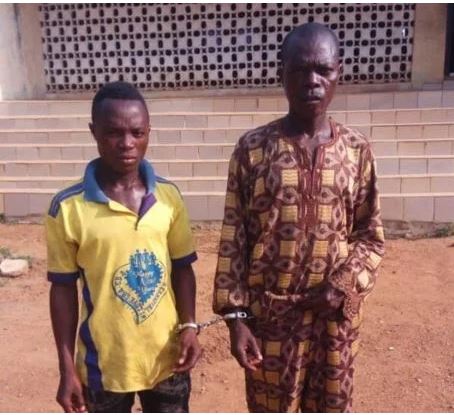 A 45-year-old man Kolese Womiloju and his 25-year-old son, Taiwo Womiloju, of Gbagba Elewure village in Odeda Local Government Area of Ogun state, have been arrested by the police for allegedly killing an herdsman, Abubakar Usman.

The suspects were arrested following a report by one Usman Bello, who reported at Odeda divisional headquarters that the deceased, who was his younger brother and had a cattle settlement at Gbagba Elewure village was missing, Daily Post reports.

The Ogun State Police Spokesperson, Abimbola Oyeyemi, in a statement on Sunday, said the police, upon the report, organized a search party for the missing herdsman.

“Later in the evening, the deceased’s corpse was found in an abandoned well in a nearby bush.

“The DPO Odeda division, CSP Ajayi Williams, led his detectives to the scene where the victim was seen with deep machete cuts all over his body.

“Having confirmed that the deceased was murdered in cold blood, the DPO and his men commenced an intelligence-based investigation into the case which led to the arrest of the father and his son who also live in the same village with the victim.

“On interrogation, they both confessed to the killing of the deceased because they saw him grazing his cows around their farm.

“They stated further that the deceased was warned to take his cattle away from the area and when he refused, he was beaten with a ‘charmed’ ring which made him to be unconscious after which he was killed.

“He was then dragged to an abandoned well about one kilometer to the place and dumped there,” he said.

Meanwhile, the Commissioner of Police, CP Kenneth Ebrimson, had ordered that the suspects be transferred to the homicide section of the state criminal investigation and intelligence department for further investigation and diligent prosecution.