Shocking!! Son Allegedly Brutalizes His Father And Mother Over Land In Delta


A couple are currently crying for help after they were beaten up mercilessly by their son over a land dispute. 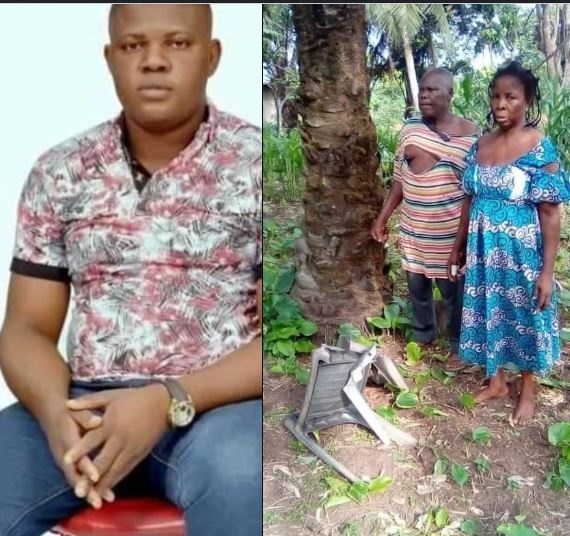 Son Allegedly Brutalizes His Father And Mother Over Land In Delta

A father has cried out after his son, a primary school teacher allegedly beat him and his wife up over land in Delta state.

78-year-old Benson Ekpenisi, from Owan-Nta Aliosimi in Ika North East Local Government Area of Delta State, said he and his wife have suffered so much in the hands of their fifth son, Patrick Ekpenisi, who teaches at Okundaye Primary School.

According to Benson, the latest attack Patrick launched on he and his wife was over a parcel of land offered for sale by him

Mr Benson said his son was angered when he learned that he planned to sell a piece of land to repair the leaking roof of his house and use the rest to take care of their needs.

Speaking to Ika Times newspaper, Pa Benson Ekpenisi said: "The story started many years ago when my son Patrick Ekpenisi who is the fifth among my children had been threatening to kill me and the mother and he had been saying it with the boast that he has political and royal backup.

"On several occasions, he had said that no policeman from Ika North East and Ika South Local Government can arrest him because he will be released by the politicians in Ika federal constituency."

Benson Ekpenisi continued: "I was sitting under a palm tree in my compound on Friday when Patrick came out from his house, which is opposite mine at Boji-Boji Owa-Nta, Aliosimi, and started pointing fingers at me and shouting that the land I was about to sell to repair my leaking roof could not be sold, that it should be given to him.

"I told him that he couldn’t tell me what to do with my own land. Besides, the land where he built his house was given to him by me. That was how trouble started and he hit my head on the palm tree.

The publication claims that Patrick carried his father up and slammed him on the ground several times, he also tried killing him by hitting his head against the palm tree he was sitting under but the old man managed to escape. 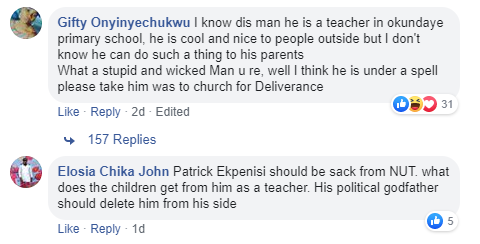 Benson Ekpenisi added: "My son threatened to kill me and his mother; he broke the plastic chair his mother was sitting on and used it to hit her head, but the old woman was quick enough to run into the house through the back door and locked the door against him. He tried breaking the door with some objects but didn’t succeed."

Benson said that was not the first time that Patrick would beat him and his wife up. He lamented that he has reported the matter to several authorities, including to the Owa Oyibu Divisional Police Station, but none has been able to intervene.

The distraught father called on the state government and other relevant authorities to quickly come to his aide before his son kills him and his wife.

Another son of Benson Ekpenisi, David Ekpenisi, complained about his brother's behavior.

He said: "I am speechless. For over three years, Patrick, a primary school teacher, has never allowed my parents to rest. I am calling on the AIG, the DPO of Owa-Oyibu, the NUT Ika North-East and the governor of Delta State to come to our aid.

"Patrick boasted countless times that he is above the law."