A Nigerian lawyer has sued the Secretary to the Government of the Federation, Boss Mustapha. 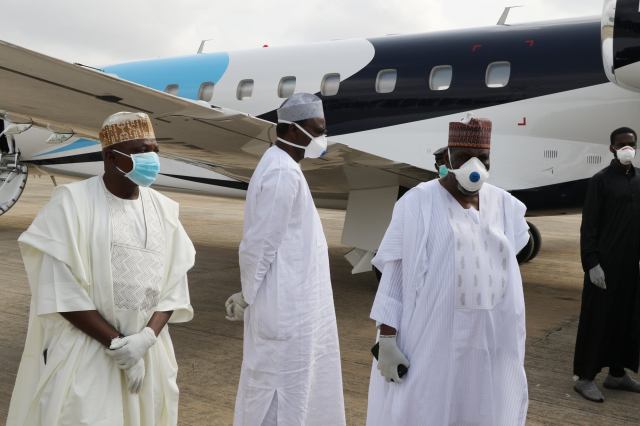 Boss Mustapha and others attended the burial
Secretary to the Government of the Federation, Boss Mustapha has been dragged to a Federal Capital Territory Magistrates’ Court at Wuse by a lawyer, Tope Akinyode.
Akinyode accused Mustapha and seven other state officials of flouting social distancing order of the federal government at the burial of the late Chief of Staff to the President, Abba Kyari.
Kyari died of coronavirus on April 17 and was buried on April 18 at Gudu Cemetery in Abuja.
According to Punch, Akinyode, in his complaint before the court, said those who attended the burial violated Federal Government’s order, “which mandates social distancing, restricts movement and prohibits mass gathering due to the coronavirus pandemic”.
He listed those who violated the order to include the SGF; the Senior Special Assistant to the President on Media and Publicity, Garba Shehu; National Security Adviser, Babagana Munguno; Minister of Foreign Affairs, Geoffrey Onyema; Minister of Aviation, Hadi Sirika; and Director-General, National Intelligence Agency, Ahmad Rufai.
The lawyer also listed as violators Ambassador Lawal Kazure, Musa Dauda, Yusuf Sabiu, Bashir Ahmed, Aliyu Sani, and Hajiya Dadiya Umar-Farouq.
In a nine-paragraph affidavit, which he deposed to, Akinyode said he watched on Channels TV on April 21 as the SGF “acknowledged and publicly apologised for violating the government order stated above”.
He said, “Further to the above, the defendants, having violated the order of government on safety precautions, were barred by presidential officials from entering the Aso Villa in a significant disapproval of their act.”
The complainant said he attached to the suit a flash drive containing pictures and videos of the alleged violation, adding that “this criminal complaint is brought in the interest of justice”.
The court has yet to fix a date to hear the complaint.
Top Stories