Revolting footage shows the white parasite wiggling in a bowl after it was removed from the patient. 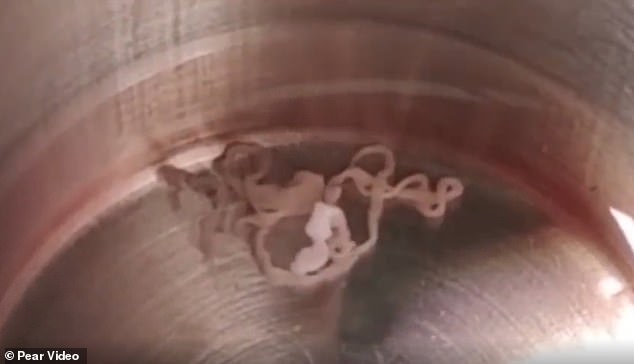 Revolting footage captures the white, slender parasite wiggling and moving around inside a container after it has been removed from the patient

A live six-inch worm has been taken out from the brain of a 23-year-old Chinese woman after she suffered from severe headaches.

Revolting footage shows the white parasite wiggling in a bowl after it was removed from the patient.

Doctors suggested that such brain infection was a result of the consumption of unhygienic food, such as raw or half-cooked wild animal meat.

The Chinese patient, known by her alias Xiao Yi, went to a local clinic in Jiangsu province of eastern China in January after having continuous headaches.

Xiao Yi was then transferred to a provincial hospital in Nanjing after she suffered an epilepsy attack.

The doctors performed brain surgery on the woman after she tested positive for being infected with parasites.

'During the operation, we found a creeping, long bug that was over 10 centimetres. It was white and live, like a noodle,' said Dr Dai Wei, a chief medic from the Gulou Hospital of Nanjing University.

'It was still moving around when we took it out completely,' the medic added.

The parasitic worm was measured to be 15 centimetres (six inches) long, according to the press.

Dr Dai asserted that such infections are mostly caused by eating wild animal meat that is raw or not cooked properly.

'[The worms] normally come from raw meat, mostly seafood, which contains a lot of parasites,' the medic told Pear Video. 'Sometimes the worms get into a person's brain through the blood and develop there.'

The 23-year-old food lover admitted to the doctors that she once devoured a dish of frogs on a trip two years ago.

'Maybe because she was travelling, the restaurant [she visited] might be unhygienic or they might cook the food with unsanitary standards,' Dr Dai explained.

The woman is currently receiving treatment at the hospital and gradually recovering following the operation.