A Nigerian man of God, TB Joshua has opened up on the source of the money that sustains his ministry. 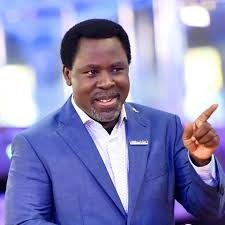 TB Joshua
Pastor Temitope Joshua of Synagogue Church of all Nations (SCOAN) has revealed the source of his money used in moving his ministry ahead.
Speaking while responding to a question posed by a viewer on Monday through his popular Christian television channel, Emmanuel TV, TB Joshua who responded through one of his ministers said people who have conscience willingly give for the work of God without being prompted.
According to him: “Wrong people have to be reminded many times before they can give because it is not from their heart”, clarifying that wrong people referred to “dubious” or “corrupt” individuals “who got their money, their things from the wrong source.”
The cleric described giving offerings as “scriptural” but emphasized that people should give as “God prompts their conscience”.
“There may not be many but people of conscience are giving, I mean, the right people are giving genuinely, for the salvation of their souls and their giving is blessed by God,” he conceded.
He remarked that some people would give in order “to be seen, to be heard and to be praised here”, adding that if they later hit hard times, they would often write letters to the church reminding them of the money they had previously given.
He said such people are misguided and often felt their offerings were a form of “bargaining with God to get what they want” or a way of manipulating Him “to give approval to their selfish motives.”
The cleric stressed: “Giving is like serving. Both should be done with joy, without being reminded, because you don’t need to be reminded to do that which gives you joy” adding that believers should ask for the Holy Spirit’s help in giving, receiving and asking.
“The force behind the money given determines the kind of money it is,” Joshua thoughtfully explained, adding, “when we inherit stolen wealth, we would live under a stolen future, thereby mortgaging our future. Remember, what comes from God goes to Him.”
The cleric stated he was “very careful” when it comes to receiving offerings from congregants, saying “If I receive something from you, the source and the manner you give will determine whether it’s a blessing or a curse that I receive from you.”
Relating to a question on the current situation leading to shut down churches worldwide due to the coronavirus pandemic, Joshua explained that such a period “demands conscience”.
“If you give something from your heart, it will bless you that gives it and also bless the person or ministry that receives it,” the cleric concluded in the interactive program by citing Apostle Paul’s admonishment in 2 Corinthians to give as “each one proposes in his heart, not grudgingly, for God loves a cheerful giver”, he added.
Top Stories