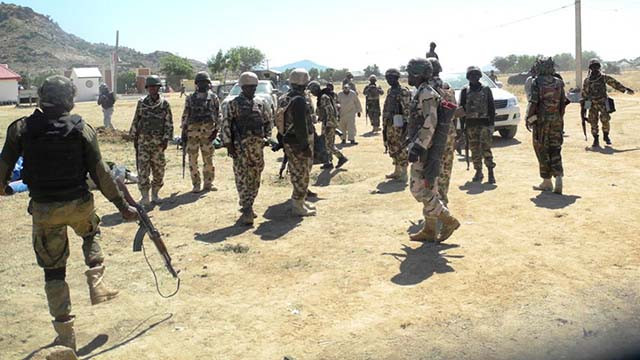 Soldiers
In a sustained renewed efforts to end insurgents activities in the North-East of the country, the Nigerian military has killed 134 members of the Boko Haram and Islamic State of West Africa Province (ISWAP) terrorists
The Coordinator, Defence Media Operations, Major General John Enenche made this known in Abuja on Monday.
He also disclosed that the military also arrested 16 high-profile Boko Haram informants within the last two weeks.
According to the statement, the feats were recorded in the ongoing operation in the North-East Theatre of Operation codenamed ‘Operation Kantanan Jimlan being conducted as part of the conclusive phase of Operation Lafiya Dole
According to the statement, “several Boko Haram/ISWAP targets were acquired and engaged with precision by Nigerian Army Artillery Regiments of Operation Lafiya Dole across the entire theatre, thus delivering accurate fire on the criminals who were seen fleeing in disarray.
“In one of such coordinated artillery bombardments conducted between 1st and 2nd May, around the Timbuktu Triangle general area by the Offensive Support Group of Operation Kantana Jimlan, seven Boko Haram gun trucks were destroyed while 78 of the fighters were killed as confirmed by both aerial and human intelligence.”
The statement revealed further that within the same period, another artillery engagement to Buk in Damboa Local Government Area of Borno State resulted in the killing of an additional 56 Boko Haram terrorists.
It explained that troops were acting on intelligence that a large number of insurgents were converging on the location which they erroneously considered as being safe from aerial bombardment during which the troops of the Nigerian Army Artillery Regiments acquired and engaged the location with deadly precision, inflicting heavy casualties on them.
On the arrest of the 16 high-profile informants, the statement said that “the arrest of such high-profile informants has significantly dislocated the criminals’ information and supply chains and equally dislocating their communication.”
Top Stories