At least six persons have been killed after a plane carrying medical supplies crashed. 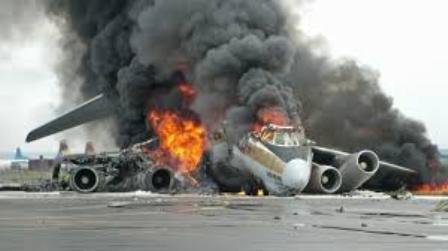 Scene of a plane crash (Photo:NAN)
Six people, including two pilots, were killed when a plane carrying medical supplies crashed in south-western Somalia on Monday, authorities said.
“The cause of the accident is not yet known,” government spokesman Ismael Mukhtar Omar told dpa.
The plane, which was carrying medical supplies needed in the fight against the coronavirus, took off from Baidoa airport in the Bay region.
It crashed shortly after, near the town of Bardaale where it was meant to land, Omar said.
Gilbert Kibe, director general of the Kenya Civil Aviation Authority, confirmed to dpa that the plane belonged to Kenya’s African Express Airways but said they had not had official reports about the casualties or cause of the accident.
Speculation in local media, however, was that the crash was caused by a missile from Ethiopian troops stationed in the area.
Ethiopian authorities were not available for comment.
Ethiopian, Somalian, and African Union forces operate in the area because of the threat posed by the Islamist militant group al-Shabaab.
The group, which is affiliated with the international al-Qaeda terrorist network, wants to establish an Islamist state in Somalia.
It repeatedly attacks security forces and civilians.
Although based in Somalia, it also regularly carries out attacks in neighbouring Kenya.
Islamic State has also gained an increasing foothold in the Horn of Africa. (dpa/NAN)
Top Stories