A patient who tested positive for coronavirus has escaped from isolation centre in Bauchi. 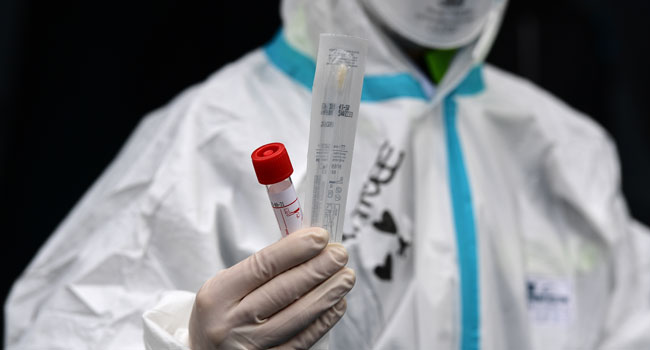 Coronavirus
An unidentified patient who tested positive for coronavirus in Bauchi state has fled from the state’s isolation centre, according to TheNation.
This was confirmed by the State Deputy Governor, Sen. Baba Tela, who is the Chairman of the Taskforce Response Committee on Lassa Fever and Coronavirus confirmed the development to newsmen at the Government House, Bauchi, the state capital while giving a situation update Wednesday.
He said ”We had at least a case where a patient ran away though we have security personnel at virtually all isolation centres but they are also human,they have to protect themselves against further exposure to avoid more positive cases in the state”.
”Once a patient is diagnosed he/she ought to follow the medication recommended by the doctor, no patient should run away from isolation centre” He warned.
Although, Sen.Baba Tela did not disclose the identity of the fleeing patient but he noted that manhunt has begun and urged members of the public to be vigilant.
The Chairman of the taskforce committee while giving a situation update said the state is making progress in the fight against Covid -19 pandemic noticeably with the drastic reduction in the newly confirmed cases as at yesterday.
According to him, the newly confirmed cases as of Tuesday is 3 , raising the total number of confirmed cases to 83 with 77 active cases while six remain discharged so far
Sen. Baba Tela further disclosed that the committee has begun contact tracing of 236 people with 820 contacts listed.
Top Stories