Shocker! Woman Gets Mauled To Death By Alligator After Going Into Pond To Try And Pet It


The 58-year-old woman started taking pictures of the reptile before going waist deep into the pond. 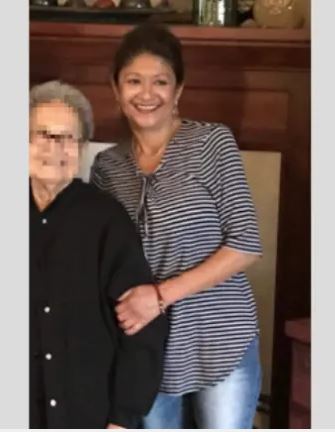 Cynthia Covert, 58, was mauled to death by an alligator on Friday after wading into its pond to try and pet it (Picture: Palmetto Cremation Society)

A beautician died after being dragged into water by an alligator when she went to pet it despite a friend begging her not to.

Cynthia Covert, 58, started taking pictures of the reptile before going waist deep into the pond at a gated community on Kiawah Island, near Charleston, South Carolina, shortly after doing a friend’s nails and drinking wine with her.

Her friend begged her not to go into the water, saying she had recently seen it grab a deer a few days earlier. Cynthia responded, saying ‘I don’t look like a deer’ before reaching out to stroke it. The gator then grabbed her with its powerful jaws but she managed to briefly escape and held onto a rope that was thrown to her by her friend.

She then said ‘I guess I won’t do that again’ before the gator grabbed her again and dragged her to her death. Her client screamed for help but Cynthia died in the water last Friday before sheriff’s deputies arrived to shoot the alligator dead.

After shooting it through the head, it took 10 minutes for Cynthia’s body to surface so that they could retrieve it. Her leg had been badly mauled by the gator attack.

On the day of her death, Cynthia had arrived at the woman’s home with a glass of wine, and spoke of her excitement at an impending visit from her boyfriend, who lived in Tennessee.

The grim details of her death were released in a preliminary police report. She is the third person to have been killed by a gator in South Carolina since 2016.

That year saw the state’s first known fatal gator attack, when a 90 year-old woman wandered out of her nursing home in Charleston and was killed.