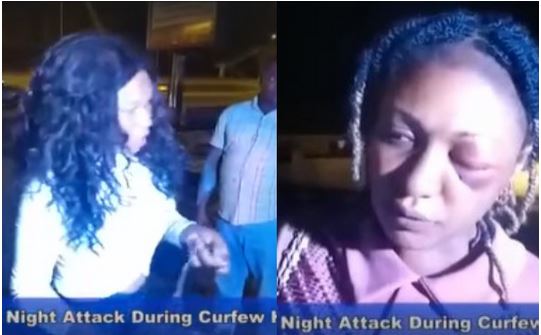 Two women who were allegedly assaulted during the curfew hours set by the Federal Government, have shared their sad experience with officials of the Federal Capital Territory Administration (FCTA) Task Force on COVID-19 .

In a video that has been shared online, a woman wearing a white top and blue bum short, said she was assaulted by the driver of a taxi she boarded from Wuse Zone 3 to see a friend in Kado area of the FCT.

She claims the driver pointed a gun at her and also stabbed her with a knife before taking her phone and money. The lady revealed that she was rescued by a good-hearted Nigerian man.

The other woman who had a black eye, said she was assaulted after getting into an argument with an unidentified lady and her boyfriend shortly after coming out of her uncle's house. She further revealed that the incident has been taken up by the police.