PAF claims IPOB's many attempts "to prove to the world that their so-called ‘Supreme Leader’ is not dead have been futile, hence, the verbal attacks on anyone and everyone". 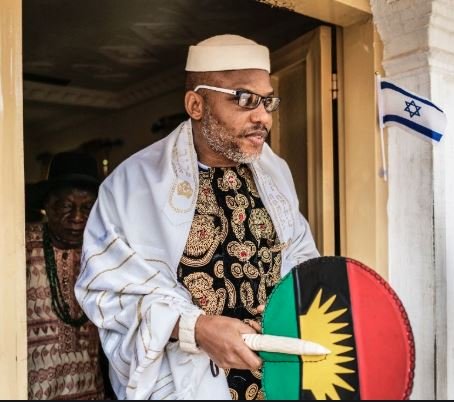 According to a report by The Nation, the Peace Accord Forum (PAF) has rubbished comments credited to leader of the Indigenous People of Biafra (IPOB), Nnamdi Kanu, on wife of President Muhammadu Buhari, Aisha Buhari.

Kanu was quoted as saying: “They have been fooling their fellow Nigerians and I am certain Aisha Buhari and her gang will end up in jail.”

In its reaction Thursday night by the National Coordinator, Ambrose Omorodion, PAF mocked the pronouncement and declared that “Nnamdi Kanu is dead and buried; IPOB knows his grave”.

The body of Northern and Southern organisations noted: “The delusional mind of Nnamdi Kanu’s impostor or whoever uses his social media accounts in recent days seems to be on overdrive gear.

*We appeal to gullible minds to seek light or remain in IPOB darkness and captivity forever.

PAF insisted IPOB’s many attempts “to prove to the world that their so-called ‘Supreme Leader’ is not dead have been futile, hence, the verbal attacks on anyone and everyone”.

“We wish to state that baseless allegations can only come from deceptive and unsound humans, bigots and riff-raffs.

“The late Nnamdi Kanu was nothing but a common criminal, a proscribed terrorist, a fugitive of law and a coward.

“It is cheering that the majority of South-Easterners are not like him or his adherents”,, the statement reads.

“Individuals using Nnamdi Kanu’s name should be informed that their game is up and we urge them to join the leader in his Danse Macabre.

“We will no longer watch as they continue to dish out gibberish to the public via by tweets, broadcasts, press statements or interviews. All forms of fabrications will now be replied accordingly.

“Indeed, we are wholly amazed that people are dropping Nnamdi Kanu’s name on a daily basis.

“These people have chosen the path of hatred and stupidity; their sentiments never allow them to think properly.

“They need fervent prayers, sacrifices to the gods or both; whichever will break their bondage is urgently needed.

“Don’t they breathe properly unless someone is condemned? In the last few years, the late Nnamdi Kanu and his sympathisers have carried on as if they have the monopoly of insults and falsehood.

“We are happy to announce that the joy ride is over. It is fire for fire henceforth. The good people of Nigeria want a break from IPOB inanity.

“The deceased Nnamdi Kanu and his chalartans have ceaselessly attacked President Muhammadu Buhari, his family, federal and state governments. All for what?

“This is 2020, the era of achieving independence through constant vituperations are gone. Governments can be criticised; however, it must be based on verifiable proof, facts and figures

“First they claimed the President was dead; now, the nitwits insist he is not the one in Aso Rock. We are happy that Nigerians have since overlooked their gullibility.

“Nnamdi Kanu’s apologists lack basic intelligence, this has been the greatest hindrance to their ability to pause, seek knowledge and try to assimilate what they are told.

“Mrs. Aisha Buhari is contributing to humanity through donations, several acts of kindness, fighting for the wellbeing of the society particularly women and children, even before the COVID-19 crisis.

“This woman minds her business. Simpletons saying trash do not have to like her, they only need to seek divine intervention in order to return to their senses.

“Of course, Nigeria is not where it should be. Notwithstanding, authorities are not resting in ensuring that the lives of all citizens get better. IPOB should swallow and digest the fact that Nigeria is not a zoo.

“There might be some issues, same as many countries worldwide but Africa’s biggest nation is strong, united, forging ahead and will never break.

“To this end, those who listen to the ghost of Nnamdi Kanu should give up the gimmicks; those who go to his grave before they tweet and issue press releases stop the lies.

“It is miserable that IPOB and their congregation have elevated ignorance to a professorial level. Since they have refused to stop moving mad, PAF will cleanse their lunacy.

“We have observed that the busy-bodies that were around Nnamdi Kanu in his lifetime got enough peanuts to keep his foolishness alive; they are probably still being funded anyway.

“We officially welcome them to the shouting bout they long started and would like to assure them that in this war of propaganda, IPOB will not win. PAF now fully in the battle.”