Wow! First Marriage By Proxy Holds In Benue Because Of Coronavirus (Photo)


The wedding was by proxy at Ipav Gboko Local Government area but the groom participated in the marriage ceremony through a representative. 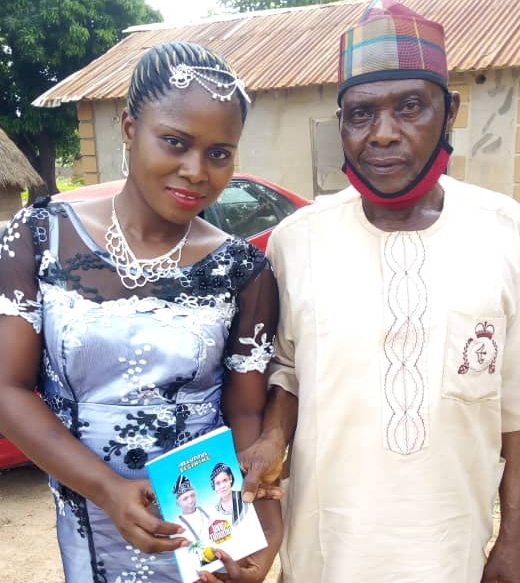 The bride with her father-in-law

According to Daily Sun, the first marriage by proxy as a result of the restriction to movement caused by the COVID-19 pandemic has held in Benue State.

The wedding was by proxy at Tse Andrew Jegu, kilometre 5, Gboko- Mkar road, Ipav Gboko Local Government area but the groom, Engr. Timothy Tim participated in the marriage ceremony through a representative.

Daily Sun gathered that his 62 year old uncle, Mr. Thomas Terver Tim stood in for him with the couple’s engagement photo attached to symbolise the groom’s presence.

It was gathered that the two lovebirds, Jane and Timothy were in a courtship for over seven years when they eventually decided to tie the nuptial cord and the date for the traditional marriage was fixed for the 9th May, 2020 even as notification and invitation cards were circulated early in January this year.

All the arrangements were put in place for the wedding only for the COVID-19 lockdown directives to thwart the whole program following the border closure by Benue State Government and the restriction to interstate movement by Federal government.

This made it difficult for the groom, a marine engineer who resides and works in Lagos to move from his station to Benue for the wedding which had been scheduled to take place in Gboko.

A friend of the couple, Jiji Jack told our correspondent that the couple contacted the Benson Abounu’s led State Action Committee on COVID-19 to see how the groom who had been in Lagos could come over and formally take his wife but were told that if he comes, he would be isolated for 14 days before he can be allowed to participate in his own wedding because Lagos is one of the epicenters of COVID-19 in Nigeria.

On his part, the groom who spoke through phone call said, “as a marine engineer, the condition Benue State Government gave was impossible for me because my office cannot grant me leave for that long.”

It was further gathered that initially, the bride’s family had mixed feelings about the wedding-by-proxy thing but the bride and the groom’s parents were able to convince them and everything went on well.

Speaking shortly after her bride price was paid, Jane said, “when it became impossible for my husband to beat the COVID-19 lockdown directives from Lagos to Benue State, we resolved that instead of incurring the expenses of reorganizing and rescheduling the wedding program, let’s do it by proxy and there is no problem about this.

“As you can see, I’m in my happiest moment now because today is my day. In fact, both parents of my husband are happily doing the needful and my husband is also actively involved in the wedding ceremony even though he is not physically here.”

Also speaking, head of the Jegu family (the bride’s family), Elder Iorkighir Jegu expressed joy that he was able to give out his daughter’s hand in the marriage despite all odds.

“It would interest you to know that our son-in-law is calling in every five minutes to ensure that things go well. So, they have my blessings and God will bless their new home.”

Commenting, the groom’s representative who doubled as the groom’s father said, “I am happy to marry for my son today and the issue of whether he is here physically or not shouldn’t be people’s headache. As far as I am concerned, the two families have no problem and we’re happy that all the marriage rites were performed according to Tiv tradition.”