A woman from Turkey has revealed how a Nigerian man impregnated her before abandoning her. 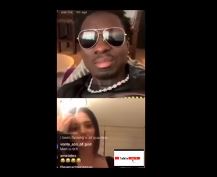 Turkish woman reveals how Nigerian man impregnate and abandoned him
Another Turkish lady has narrated how an Ondo man impregnated and abandoned her. She is now being taken good care of by an Igbo man.
In an Instalive live chat with popular comedian Michael Blackson, the lady disclosed that she used to work with the 42-year-old Ondo man who owns a business in Turkey. However after she got pregnant, she said the Ondo man disappeared.
She also disclosed that the Nigerian man who travelled down to Germany afterwards, married his first baby mama same month he got her pregnant. The Turkish lady said she named her baby after an Igbo man who helped her out her condition.
Watch video:
Top Stories