The Fear Of Coronavirus Slowly Turning Governor Wike Into A Tyrant


Victor Enengedi writes on recent antecedents of Governor Nyesom Wike as the lockdown in the state persists. 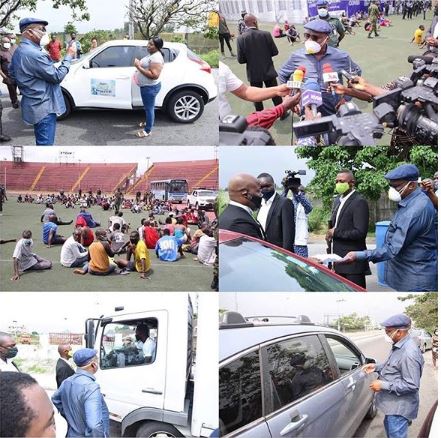 Nyesom Wike
Rivers State Governor, Nyesom Ezenwo Wike became the number one trending topic on social media yesterday, earning uncomplimentary remarks and condemnation from social media users over an act which has been viewed by many to be tyrannical.
The governor who has recently become a frequent feature in the news in the last couple of weeks ordered the demolition of two hotels in the state for allegedly violating lockdown directives. According to photos and video which made it to the internet, Wike was on ground to supervise the destruction of one of the hotels located in Eleme and had his officials headed to Onne to carry out the demolition of the other.
Since declaring a lockdown in the state in an effort to combat the COVID-19 pandemic, the governor has actively been on ground to enforce compliance, confronting motorists, pedestrians and even security agents whom he has accused of sabotaging the goal of the lockdown.
A few days ago, Wike had hit major roads arresting violators of the lockdown and ordering his security aides to escort them straight to isolation centres where they would be treated as potential carriers of the virus.
Last Friday, after arresting 14 persons who hid inside two trailers conveying cattle from Adamawa to Rivers, Wike ordered the two trailers and the cows to be auctioned. Surely, two wrongs cannot make a right, and Wike has no constitutional right to confiscate and auction the property of a citizen without due legal process.
The governor’s new behaviour smirks of the tendencies of a dictator in the making with its origin from the hysteria to contain the coronavirus. They began to manifest in early April with the controversial arrest, detention and charging to court pilots of Caverton Helicopters and their 10 passengers. Almost two weeks later, the governor ordered the arrest and detention of 21 ExxonMobil workers for allegedly violating the state’s lockdown order by entering Rivers through Akwa Ibom.
Since his election as governor, Wike who was once a Minister of State for Education in Goodluck Jonathan’s administration has always considered the federal government of President Muhammadu Buhari an enemy. He has even converted the COVID-19 crisis in his state to a war between him and the federal government. Weeks ago, during a press conference, Wike proceeded to use of unguarded and inciting comments where he accused the federal government of a conspiracy to infect citizens of the state with COVID-19.
Wike's recent rhetoric has become a major worry for all lovers of the rule of law and democracy. It wreaks of paranoia. He has so allowed his fear and paranoia for the Coronavirus cause him to evidently manifest the tendencies of a despot and he is prepared to bash anyone that gets in his way just to prove Rivers is his.
Even though in his latest broadcast, Wike promised "that those arrested for violating the relevant Executive Orders would certainly have their day in court and due process would be the hallmark of any punishment that they may suffer if duly convicted as prescribed by our ordinary laws," that promise was however absent in Wike's decision to auction seized vehicles and demolish the two hotels yesterday.
Co-incidentally, Wike’s peer in Lagos, Governor Babajide Sanwo-Olu penalised a hotel in Badagry over the same offence like that in Rivers State. Sanwo-Olu did not have to exhibit a show of power like Wike did to prove he is in control and willing to protect residents from the pandemic. He simply ordered the shutdown of the facility until further notice. Wike could learn a thing or two from the Lagos governor.
It is unlawful and illegal to carry out a demolition without the authority of a competent court and Wike who is a lawyer should even know better. Only a court can pronounce such punishment of forfeiture or demolition of property. He cannot be the Executive and at the same time, usurp the powers of the legislature and judiciary.
Whatever good intentions he may have had has been eroded when fundamental human rights of the people are being infringed upon.
While it is the governor's right to protect the state and its residents from threats, both seen and unseen, it is imperative to do so under the guidance of the rule of law, rather than to go on a campaign of terror in the name of combating the spread of coronavirus. Today, we are in a democratic system, the likes of Wike should not remind us of the dark days of the military juntas where rule of law was thrown into the garbage can.
Victor Enengedi writes from Lagos.
[email protected]
Top Stories