Gov Hope Uzodinma has presented 20 brand new Sports Utility Vehicles to the serving Judges in the state as a way of motivating them to work. 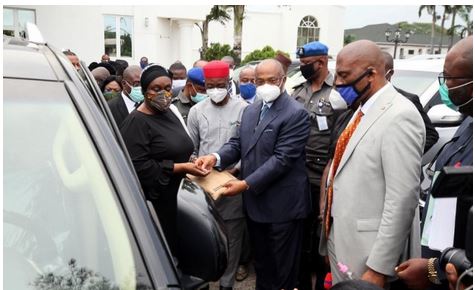 The Governor of Imo State, Hope Uzodimma on Wednesday presented vehicle gifts to Judges in Imo State and stressed the need for the judicial arm of government to join forces with the other arms, the Executive and Legislature, to move the State forward.

The Governor, who stated this during a courtesy visit by Judges, said that the dividends of democracy can only be delivered to people when all the arms of government close ranks and work as a team.

While expressing his zeal to work with the Judges, Uzodimma presented vehicle gifts of 20 brand new Sports Utility Vehicles (SUVs) to the serving Judges as a way of motivating them to work.

He noted that Imo State Judges have not been treated well by past administrations and pledged to change the narrative.

The Governor, who did not only stop at presenting vehicles to the Judges, also offered to take care of the outstanding entitlements of the retired Judges and ensure that other retiring ones get their entitlements a month or two after retirement.

In a vote of thanks, the Acting President of the Customary Court of Appeal of Imo State, Justice Matthew Njoku eulogized the Governor for his magnanimity to the judiciary in such a short period.

He thanked Uzodimma for “wiping away their tears and removing the shame they have faced in the past before their brother Judges from other States.” He prayed for God’s guidance and protection for the Governor in his day to day activities in the pilot of Imo State.