The doctors, under the platform of Association of Residents Doctors last week Friday announced plans to begin an indefinite strike due to the non-payment of their salaries. 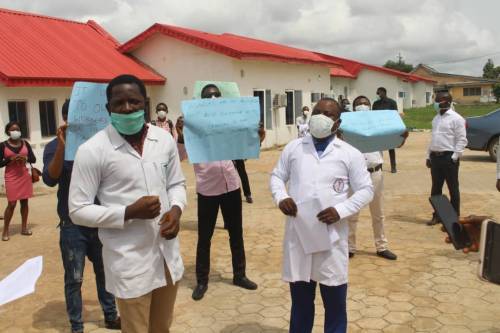 According to SaharaReporters, aggrieved medical doctors working at the University of Medical Sciences Teaching Hospital in Ondo State have continued to lament the non-payment of their salary arrears.

The doctors, under the platform of Association of Residents Doctors last week Friday announced plans to begin an indefinite strike due to the non-payment of their salaries.

The protesting doctors stated that no fewer than 150 of them had not been paid salaries for six months and had no money to take care of their basic needs.

Many of them told SaharaReporters that they have taken to borrowing money from friends to survive and feed their families.

Speaking with SaharaReporters, one of the doctors, who identified himself only as Abiodun, said they been struggling to even cope at work with empty stomachs.

Another medical doctor at the annex complex of the hospital in Akure, Adebayo, said it had now become embarrassing for him to trek to work daily due to non-payment of salaries.

He said working at the state’s hospital in this period of Coronavirus and lockdown has been a tough time for him and colleagues.

He said, "I think you can just imagine us carrying out some surgery during this period of pandemic and the lockdown in the state on empty stomachs and without pay."

Dr Abiola Shittu, Acting President of the Association of Resident Doctors in the state, disclosed that many doctors had run into debts and need to meet up with financial obligations in their homes.

According to him, despite all warning and pleas from the doctor, the state government had repeatedly failed to yield to their demands.

He said, "This sorry situation (non-payment of salary arrears) has plunged us and our families into severe hardship and humiliation.

"Our members are being evicted from their houses as they are long overdue on their rent renewals. Some of us have to trek long distances to the hospital as we can no longer afford to fuel our cars or board a motorcycle among other demeaning experiences.

"To avert a repeat of what happened in January, we have had wide consultations in form of letters and meetings to our management and government representatives to hear our peculiar situation and do the needful but all to no avail.

"We will, unfortunately, not be able to continue to provide this much needed, cherished and patriotic service beyond the 15th of May for the obvious reasons as we would have run out of every means to continue to do so.

"We care about our patients and the good people of Ondo State but no one seems to care about us or our families."

Also speaking, Dr Taiwo Olagbe, General Secretary of ARD, said while the doctors were asking for the payment of their salaries, the government needed to make sure it regularised their arrears.

He said the protesting doctors had issued a week ultimatum to the government to pay them or else they would embark on strike action.

"So, the government must expedite action on the payment of all these arrears and backlog of salaries before the expiration of the set deadline to avoid industrial disharmony."

In his reaction, Governor Rotimi Akeredolu said he had directed the immediate payment of all outstanding emoluments of the protesting doctors.

Akeredolu said the payment was in addition to the earlier packages approved for medical and health workers in the state.