The truck which was intercepted on Wednesday along the boundary between Obot Akara local government area of Akwa Ibom state and Ikwuano in Abia state. 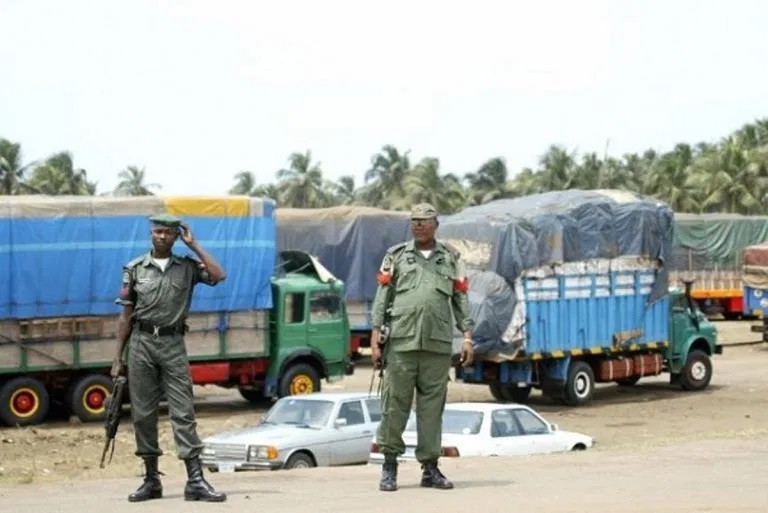 According to a report by Vanguard, fear has gripped Akwa Ibom state residents as the COVID-19 taskforce set up in Obot Akara local government area has intercepts another trailer conveying about thirty-two ((32) youths from the northern part of the country into the state.

It was gathered that the truck which was intercepted on Wednesday along the boundary between Obot Akara local government area of Akwa Ibom state and Ikwuano in Abia state bringing the number of trailers so far intercepted in the state with persons to two since the inter-state lockdown order.

It could be recalled that a trailer that had transported cows and goats from the northern part of Nigeria to the state was intercepted in Eket local government area penultimate week with 13 northern youths attempting to sneak into the state.

The residents’ fear, however, followed the alleged transportation of Almajiris suspected to be COVID-19 positive from some states in the north to the southern states.

They are also worried about the invasion of some states in the region by suspected terrorist groups from the north.

A resident who simply identified himself as Mr. Umoh simply said, “Government must not treat this transportation of young persons from the north to this part of the country with kids glove. If you know what is happening today in Delta state, Enugu, Benue.

“Sometimes they don’t even use the roads, they may decide to use the bush tracks. I think the best thing government can do is to beef up security in the communities. And the communities must be involved in this, or else it will not work”

Also, a public servant from Obot Akara LGA who spoke on the ground of anonymity lamented, “We have to ask questions why these persons from the north will leave their states to come down to this part of the country?. I strongly believe that there is a well-calculated plot to attack this region.

“I am angry with government and security agencies because they are not doing enough. If they are, why have they not asked questions about how these invaders beat all checkpoints to get down here. We must not forget that before COVID-19 outbreak some people had raised alarm over plan to attack this part of the country by sponsored terrorists”

The state police command confirmed the interception of the trailer with 32 northerners on Wednesday, even as it dismissed speculations that the occupants were Almajiris.

The Police Public Relations Officer, Mr. Fredrick Nnudam said, “They are not Almajiris but Hausa/Fulani men who live at Itam Nassarawa cattle market, Uyo. They were intercepted in a truck on Wednesday, May 13, 2020, at about 11: 45am at Obot Akara and Abia state boundary.

“On further interrogation, they noted that they were leaving the state since livestock trading was temporarily suspended in the state and cost of living difficult for them.

“Consequently, the Commissioner of Police Akwa Ibom State, Mr. Imohimi Edgal has ordered that they will only be allowed to leave the state after the ban on inter-state travels is lifted”

The state government had on Monday, May 11, 2020, banned the transportation of new consignment of livestock into the state until the inter-state lockdown order was lifted with effect same date.

The state government decision came two days after governor Udom Emmanuel’s interaction with the residents on state-owned Radio and Television stations where he responded to questions on what his government was doing to check the influx of northern youths being conveyed through trucks into the Niger Delta region amid the COVID-19 lockdown order.

Reacting to the Eket speculation, governor Emmanuel had explained that security agencies escorted the trailer and the 13 occupants outside the state after off-loading the goats and cows in Eket.

Also to allay the people’s fears and reassured them of their safety, the governor had further explained that the borders had been secured with 3G cameras.