A Nigerian nurse in the USA has talked about the way the COVID-19 outbreak has affected her. 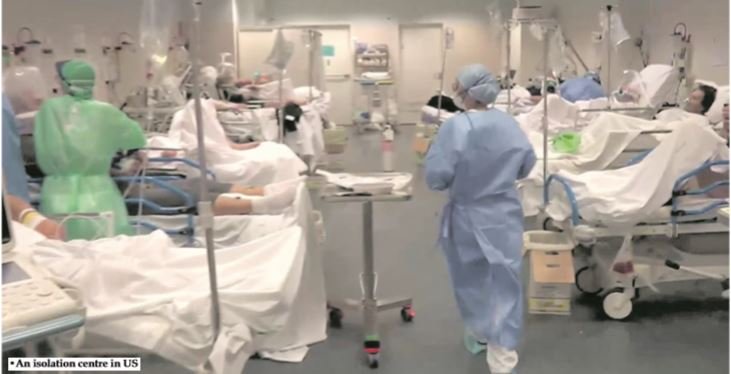 An isolation centre in the US

Until she got married about four years ago, Jessica Oche was first and last a mass communicator, having graduated from the Mass Communication Department of Benue State University. But all that changed with her marriage to her US-based husband as a result of which she had to relocate to God’s Own Country.

Once in the US, she realised that there was little she could do with her Mass Communication certificate, hence she did not have to think twice about it when his father-in-law, who is also based in the US, suggested that she should seek a career in Nursing.

She said: I actually studied  Mass Communication at the Benue State University, but  marriage to a family who are all in the medical field  motivated me to go into Nursing, coupled with  the fact that my degree (in Mass Communication) was not even going to get me a job in my field of study.

“My father in-law, who is a medical doctor, suggested that I give nursing a try. That meant that I would go back to start from the scratch, which was kind of difficult. But then, we were talking about my life. If I wanted a good job and comfortable living, I needed to try to see if it was something I liked.

“So, I started a Nursing Assistant class, which is a four-month course. It was tasking but I love it. That was how I found myself fully in it today.”

On completion of her Nursing Assistant and Medical Technical courses, she started working in a nursing home as a home care, which entailed going to patients who are bedridden at home, giving them medications and watching over them for a scheduled number of hours.

She said: “I was actually doing two jobs at the time, but when nursing school kicked in and I could not cope with two jobs, I started working at the nursing home on part time basis.

“In March 2019, I did clinicals at Highpoint Regional Hospital. I got retained and started working there.”

Although she has had to take a break from her job at Highpoint Hospital since January after she discovered that she was pregnant and needed to work at a less busy place than the emergency department where she had to be on her feet 24/7, she has her eyes set on becoming a travel nurse in the next few years.

“I rarely travel, so I want to use the nursing field to achieve it. I want to tour around seven cities; then I can start going home for six months and back here for six months. Travel nursing pays a lot (laughs).”

Jessica recalled that a lot has changed about her life and world view since she began a career in Nursing.

“When I first started practising, I always cried when a patient died,” she said with a smile suggesting that she has since got over the emotion.

“I have seen many die. That is life. Death is inevitable as we all must die someday. But being there and seeing it happen every day makes you value life the more.”

As it would be expected of the people in the medical profession since the outbreak of the coronavirus pandemic, the last couple of months have been very challenging for Jessica.

Asked how she has been coping with the challenge, she smiled and said: “We have been  handling the pandemic gracefully, wearing a smile even when it is hard to,  just to make patients/residents feel comfortable as they all are anxious as they tune in and watch the news 24/7 to know what is going on. About 56,000 deaths in a month would scare anybody, you know?”

“I work presently in an Assisted Living at Greensboro North Carolina, which is just 20 minutes’ drive from my residence and, of course, some patients/residents who live there were unfortunately exposed to the virus because most of them go for doctors’ appointment twice a week or for dialysis every other day. As a result, they contracted it.

“Most of the patients here do dialysis. You get them ready in the morning and give them their medications. Due to their health issues, they need a nurse to be around them 24/7. My job right here is to take them to hospitals for dialysis, not to give deep medical treatment aside giving them their medications, checking their blood pressure and if emergency arises, call 911.”

Jessica recalled that she has been assigned to three infected patients since the outbreak of the coronavirus pandemic in the United States. Unfortunately, they all are dead now due to underlying medical conditions.

“Because they had terminal illnesses, the moment they were diagnosed of COVID-19, their families signed in for them to be put on medications that would quicken their passing process, which they got placed on immediately and die three to five days. But they were placed in isolation before death and cremated after their death,” she said.

Asked whether the deceased patients were Nigerians, she answered in the negative, saying: “I felt very sad. They were all white people. This facility is mostly whites…there is just a black lady, funny enough. Not that they don’t accept blacks, but it is quite expensive; so blacks would rather go to where is less expensive.

“We have mostly rich white people here. It is like home for them. They have rooms to themselves set up like their homes. They have nurses at their disposal to give them medications and they eat whatever they like.”

Jessica hinted that the dearth of personal protective equipment (PPE) complained about by health workers in Nigeria also applies in the US.

“Talking about being sufficiently provided with PPEs, I would say no because we have to reuse them at the moment, which is not safe. But it is better to have one than to have none, so we have no choice than to comply.

“My daily worry is the fear of getting infected and coming home to my family with it, coupled with the fact that I am pregnant at the moment. But I have no choice but to work.

“Reusing PPEs worsens my fears, but I am still at it on a daily basis doing my best and praying that I don’t contract it.

“And over here, you must know how to properly handle your PPE, the removal and all. You learn them all. You don’t just wear and take them off anyhow; you have to follow the processes, and I must agree it helps.

“While I was lucky to see and buy, some didn’t. But above all, it’s all the grace of God.

She reckons that many medical professionals are testing positive basically because of insufficient PPEs, noting that almost every health facility in America is reusing PPEs’ at the moment.

“Another, I think, is your hand touching your face. I know everyone is trying to prevent that, but most times, it is hard when your face itches, you will unconsciously touch it before you realise you have.”

On her work schedule, she said: “My shifts are eight hours  normally, but because of call out or some co-workers, like everybody gets checked before work every day, because if your temperature is high, you will be sent home.

“So the floors are often short staffed. I have had to work 12 hours or 16 hours because I got stuck as my relief didn’t show up.”

She disputed the claims in some quarters that treatment for COVID-19 in the United States is selective, saying “Not really. But I think it favours the younger ones than the old because of their weak immune system. Everyone’s immune system weakens as they age.”

Jessica expressed her desire to return to Nigeria in the foreseeable future to enlighten Nigerian health workers on the proper way to relate with patients.

She said: “The one thing that is always on my mind after working at hospitals and other facilities abroad  is coming  home to enlighten our health care workers on how it should be done, talking  about patients’ welfare.

“There is still a lot back home to be learnt, I must stay, with regard to handling medical issues and welfare. We lag behind a lot in the area of professionalism and how things are being done.

“For instance, you can easily lose your licence here for even frowning at a patient, not to talk of disclosing their ailment to anyone. Once a patient reports you, you’re gone unlike back home where patients don’t have a say.

“By God’s grace, our country will get better. But it takes work…a lot of work, I must say.”

The interviewee’s real name and picture are withheld on request to protect her job.