10 pirates have been arrested as Nigerian Navy foils hijack of a Chinese vessel.

10 pirates have been arrested by the Nigerian Navy after hijacking a Chinese vessel, MV HAILUFANG II off the coast of Ivory Coast.

The 18 crew members who were rescued after the attack comprised of Chinese, Ghanaians and Ivorians. Commodore Ibrahim Shettima, the Commander Nigeria Navy Ship (NNS) BEECROFT said the arrest and rescue mission took place on 15 May.

Shettima said NNS NGURU was deployed to intercept the vessel after the Nigerian Navy was alerted of the attack. 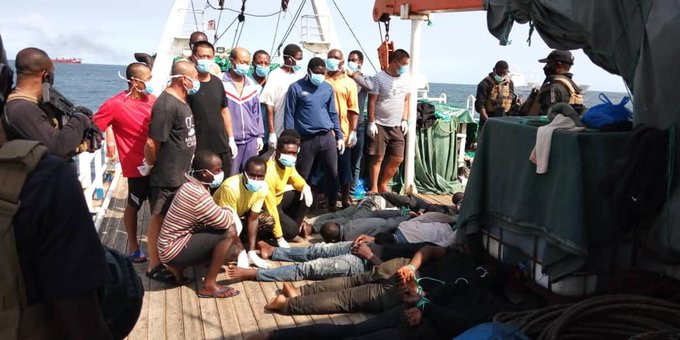 “The pirates took control of the vessel and directed the vessel toward Nigerian waters.

“On interception of the vessel at about 140nm south of Lagos Fairway Buoy, the pirates refused to comply with the orders of the Navy Ship.

“Hence, the NN had to conduct an opposed boarding of the vessel.

“All ships crew were safely rescued, while the 10 pirates were arrested,” he said.

The commodore noted that the last five known or documented pirates’ attacks were outside Nigerian waters, which the NN responded in the interest of regional security.

“This is aptly captured in the NN Total Spectrum Maritime Strategy, which covers Nigeria’s outermost maritime area of interest, encompassing the entire West African waters and the GoG.

”This underscores the need for increased regional cooperation in terms of information sharing and further deepening of response capability.

”For instance, this rescue effort was bolstered by additional intel received from the Beninous Navy during the operation.

“The NN has the capability and will power to deal with such perpetrators."