The formerly buff nurse was almost unrecognizable in the new photo he shared from the hospital. 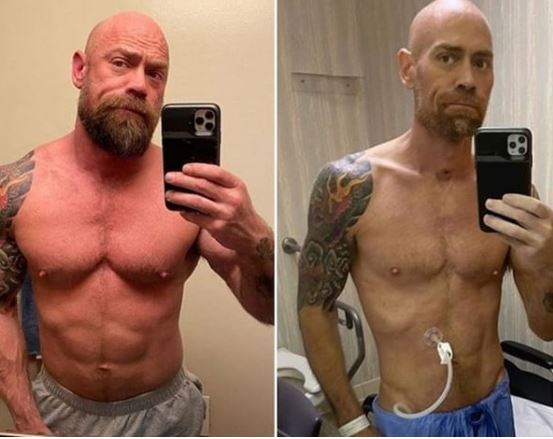 Nurse Mike Schultz shocked followers when he shared a recent photo to show how COVID-19 affected his body.

The formerly buff nurse was almost unrecognizable in the new photo he shared from the hospital.

The 43-year-old nurse from San Francisco shared a before-and-now photo to his 30,000 Instagram followers. The picture on the left was taken about a month before he first got sick. The photo on the right was taken in a recovery ward. He said it exhausted him to stand up from the bed for a few minutes to take the picture.

Speaking to BuzzFeed News, Mike narrated how he woke up thinking he'd been out for only 1 week, but a nurse told him 6 weeks had passed.

He said that as he sat in his bed in a Boston hospital's coronavirus ward, he chatted with one of his favorite nurses about his treatment of being sedated and intubated.

"I thought only a week had gone by," he told BuzzFeed News.

That's when she let him know he hadn't been in the ward for one week but he'd been there for six.

"I was so weak. This was one of the most frustrating parts," he recalled. "I couldn’t hold my cellphone; it was so heavy. I couldn’t type, because my hands shook so much." 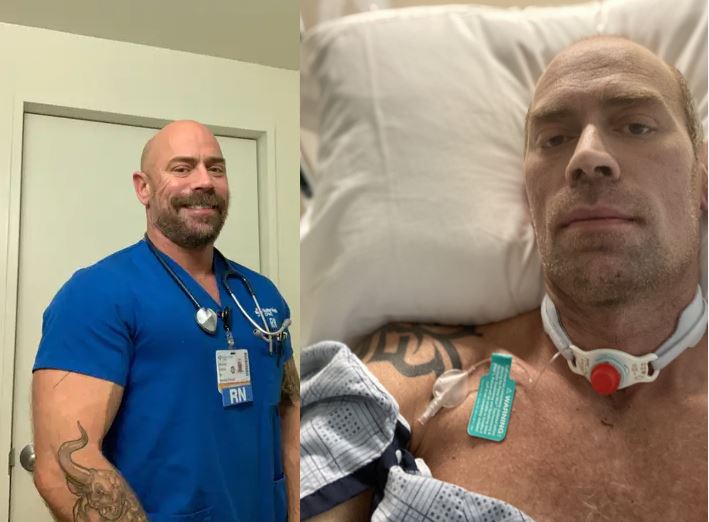 The nurse said he had no underlying health conditions. He normally worked out six or seven times a week. He weighed about 190 pounds before his illness. After he was discharged and started eating again, he was able to get his weight back up to 140 pounds.

Mike was hospitalized on March 16, a week after attending the Winter Party Festival in Miami before the lockdown restrictions. Nearly 40 people from that event contracted the virus and 3 died.

Two days before Mike was hospitalized, he'd arrived in Boston from his home in San Francisco to see his boyfriend, 29-year-old DJ Josh Hebblethwaite. He was a little under the weather but did not have a fever.

Within days of arriving in Boston, Mike had a fever and he struggled to breathe. His lungs were also filling with liquid, so they raced him to the hospital.

Schultz ended up being intubated for four and a half weeks, and his boyfriend could not visit him due to hospital protocols.

Mike has recovered but he says the sickness affected his sense of taste.

He recalled how he ordered two double cheeseburgers, small fries, and a strawberry shake at McDonald's when he was finally released from the hospital:

"It did taste different. I think I lost some of my taste," he said, "but it was good."

As he continues his recovery, Schultz told Buzzfeed that both he and Hebblethwaite have received some backlash online for their attendance at the Winter Party. Some even said Schultz deserved to get sick, but he is choosing to focus on the outpouring of support he's received since posting his photo.