The girl was bitten by a snake after getting set to begin a cheerleading tumble in the garden of her home in Houston, Texas. 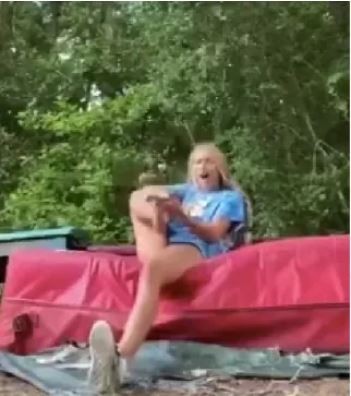 Paris Montgomery recoiled with pain after being bitten by a copperhead snake while practicing a dance in her back yard (Pictures: Tracy Montgomery)

An 18 year-old clenched her foot with pain after being bitten by a poisonous viper while practicing a dance routine. Paris Montgomery was attacked by the copperhead snake as she took off her shoes to begin a cheerleading tumble in the garden of her home in Houston, Texas, last week.

Paris could be seen recoiling with shock after the bite, and taking off her sock to rub her injured foot. She attempted to begin her routine, before being overcome with pain, putting her feet back into her shoes, and hobbling back indoors.

The teenager’s mother Tracy says the snake bit Paris so quickly that she did not realize what had happened, and initially believed her foot had been scratched by a stick.

On realizing what had happened, Paris’s family rushed her to hospital, where she was given an anti-venom treatment. 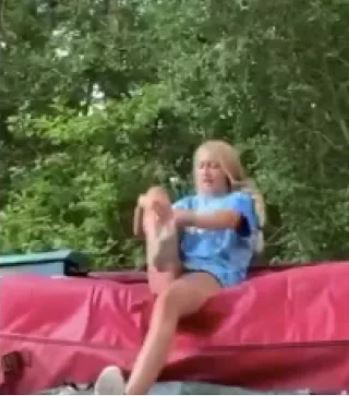 Paris told KTRK: ‘I was about to video myself tumbling, and I was just taking my shoes off, and I stepped on a snake and it bit me. Something just started hurting. I didn’t find out it was a snake. When we got to the emergency room we were trying to find out what happened, and we zoomed in and they told me it was a snake.’

The teenager is now on the mend, although she still cannot walk on her injured foot. Her mom has shared the video online in a bid to warn others of the potential danger lurking in their yard. Copperhead snakes are members of the viper family, and are native to the eastern United States.

While poisonous, their bites are rarely fatal to humans, although can cause serious secondary infections if left untreated.