One of the people who survived the Pakistani plane crash has talked about how he narrowly cheated death. 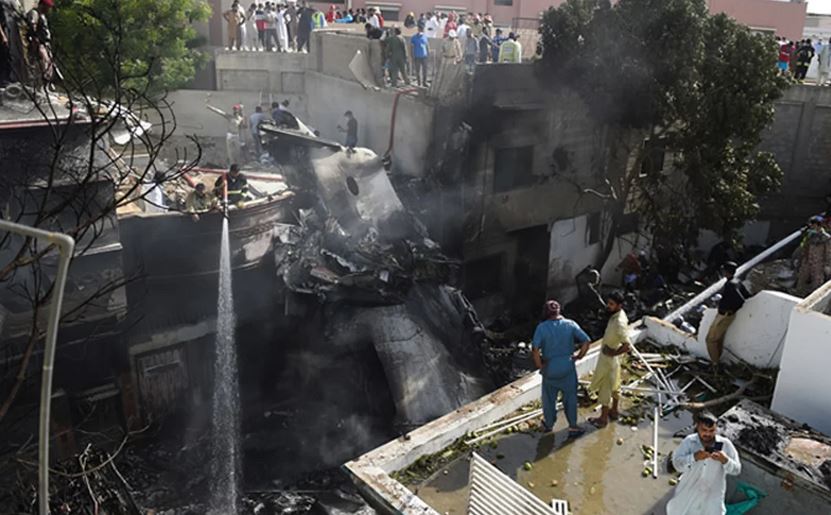 Firefighters spray water on the wreckage of a Pakistan International Airlines aircraft after it crashed at a residential area in Karachi. Photo: AFP

One of the two people to survive a plane crash in Pakistan that killed 97 people onboard has described jumping from the burning wreckage of the aircraft after it hurtled into a residential neighbourhood, the Agence France Presse, AFP, reports.

The Pakistan International Airlines plane came down among houses on Friday after both engines failed as it approached Karachi airport, the airline said.

Its wings sliced through rooftops, sending flames and plumes of smoke into the air as it crashed onto a street, sparking a rescue operation that lasted until the early hours of Saturday.

The 97 victims had been on the plane, the provincial health ministry said, while four people on the ground were injured after earlier reports on Friday suggested some residents had been killed by the crash.

Planes had been grounded during a two-month lockdown because of the coronavirus pandemic.

“After it hit and I regained consciousness, I saw fire everywhere and no one was visible,” passenger Mohammad Zubair, 24, said from his hospital bed in a video clip circulated on social media.

“The cries were everywhere and everybody was trying to survive. I undid my seat belt and I saw some light and tried to walk towards it. Then I jumped out.”

Zubair had suffered burns but was in a stable condition, a health ministry official said.

The airline named the other survivor as the president of the Bank of Punjab, Zafar Masud.