The state's Commissioner for Information, Gbenga Omotosho, made this new disclosure. 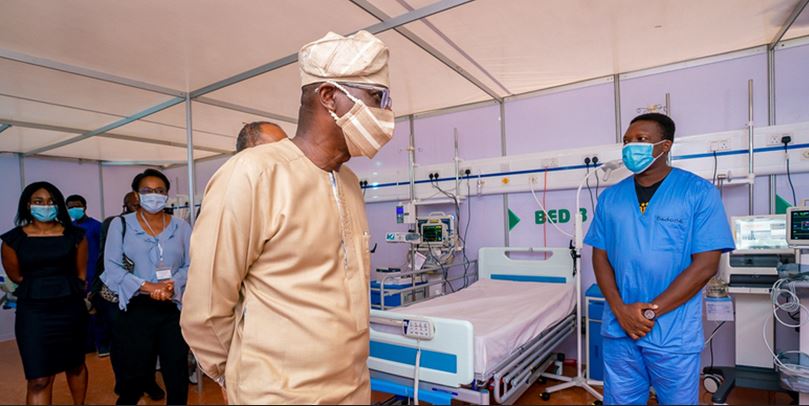 Lagos governor at an isolation centre

The Lagos State Government has said that it would enlist 600 patients to determine the efficacy of Chloroquine as a valid treatment for COVID-19.

The state’s Commissioner for Information, Gbenga Omotosho, made the disclosure.

He said, “In summary, we will be looking at about 600 patients. The trial will go on till we recruit the required number.

“There will be an independent Data and Safety Board. The board can advise that study be discontinued if the statistical evidence of the usefulness of a drug is overwhelming and in which case it becomes unethical to withhold it from other groups.” Speaking as well, the governor of the state, Babajide Sanwo-Olu, said the state had learnt how to deal with infectious diseases, through its handling of the Ebola pandemic in 2014.

“That was also epic in Lagos and it gave Lagos some understanding about how serious infectious disease could be managed. We have an Infectious Disease Hospital in Yaba and even after the Ebola case, we had some international grants and over the last two to three years, we have built what we call a biosecurity lab level four, which can match any of its kind in the world.”

The Lagos State Commissioner for Health, Akin Abayomi, had earlier in April said the state was going to hold clinical trials.

The adaptation of Chloroquine for clinical trial as a potential drug in managing the symptoms of COVID-19 is based on data from other treatment centres across the world.

No state or federal government official has released data on treatment therapies used in their isolation/treatment centres.

Wow! Chimamanda Adichie Lights Up Instagram With Adorable Video Of Her Hailing Her Daughter In Igbo
Recent Stories