Spain began a 10-day mourning period for victims of COVID-19 on Wednesday as the country’s death toll reached 27,118. 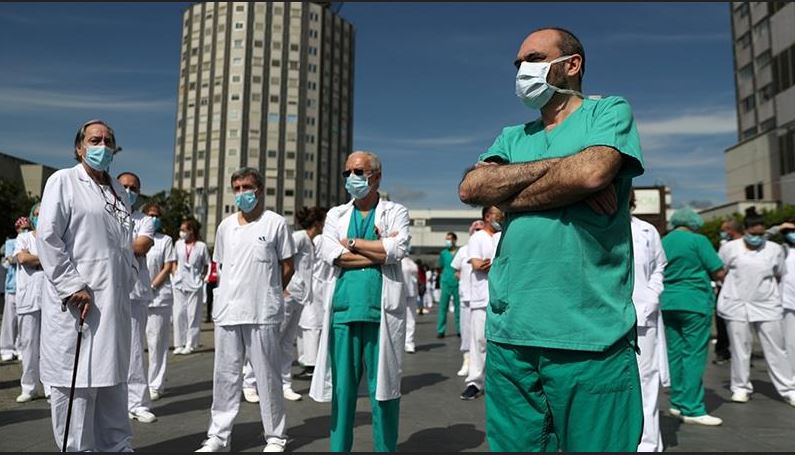 Spain has begun an official 10-day mourning period for the tens of thousands of victims of the coronavirus pandemic in the country.

Starting from Wednesday, all flags on public buildings across the nation and on Spanish naval vessels will be lowered to half-mast until June 5 to pay tribute to the more than 27,000 people that have so far lost their lives.

Spanish Prime Minister Pedro Sanchez said on Twitter this would last for “10 days, the longest period of mourning in our democracy, in which we will all express our sorrow and pay homage to those who have died”.

The mourning period, which was approved at a cabinet meeting on Tuesday, would also include a solemn memorial ceremony presided over by Spain’s head of state, King Felipe VI, according to government spokeswoman Maria Jesus Montero.

The dead are “men and women whose lives have been suddenly cut short, leaving friends and family in great pain, both from the sudden loss and from the difficult circumstances in which it has occurred,” she said following the cabinet meeting.

“Eight out of 10 victims were older than 70, they were those who helped build the country that we know today.”

Spain, where a nationwide lockdown was first imposed on March 14, is one of the countries hit hardest by the pandemic, registering the fifth-highest number of confirmed cases and deaths.

As of Wednesday, at least 27,111 people had died of COVID-19, the highly contagious disease caused by the new coronavirus. The overall number of known infections stands at more than 236,000, with some 150,000 recoveries.

Spain’s healthcare workers have been severely affected by the virus, with up to 20 percent infected out of the total confirmed case, Al Jazeera’s Marta Herrero reported.

“In the weekly cabinet meeting yesterday, the Spanish government decided to consider work accident for all the people that have died and been infected by COVID-19 in the healthcare sector,” she said from the capital, Madrid.

The government has so far renewed a state of emergency four times, which has allowed it to impose some of the world’s tightest restrictions on the country’s nearly 47 million people.

But in recent weeks, strict home-confinement orders and bans on public activity have been gradually relaxed.

Since May 11, half of Spain’s population has experienced an easing of the restrictions, with cafe terraces reopening and people allowed to meet in groups of up to 10 people  although these measures have not yet been rolled out in the worst-hit areas such as the Madrid region and Barcelona.

On Saturday, far-right protests erupted in Madrid as thousands of people, many honking car horns, rallied against the government’s handling of the coronavirus crisis and the lockdown measures.

No other country has so far announced an observance on the scale of Spain’s 10-day mourning period, an event unprecedented since the country reinstated democratic rule in 1978.

Opposition parties had criticised Sanchez’s left-wing coalition government for not paying tribute to the victims of the pandemic as Spain’s high death toll became a point of political debate.

“They should have declared the mourning days ago,” Madrid resident Conchita Hernandez, 77, told The Associated Press news agency. Her husband, Agustin Alvarez, 77, compared the nearly 9,000 virus-related deaths in Madrid to the casualties during times of war.

“The mourning would have made more sense when we were all homebound, but I still think it makes a lot of sense,” Alvarez said.

China, where the virus emerged in late 2019 and has now officially killed 4,638 people, held a national day of mourning on April 4, while Italy, which has so far counted almost 32,900 deaths, mourned its victims on March 31.

And this week, the United States lowered its flags to half-mast for three days to remember its dead, who now number more than 98,900, the heaviest toll in the world.