Two of President Buhari's appointees have been cautioned to stop embarrassing the nation after they fought on Twitter. 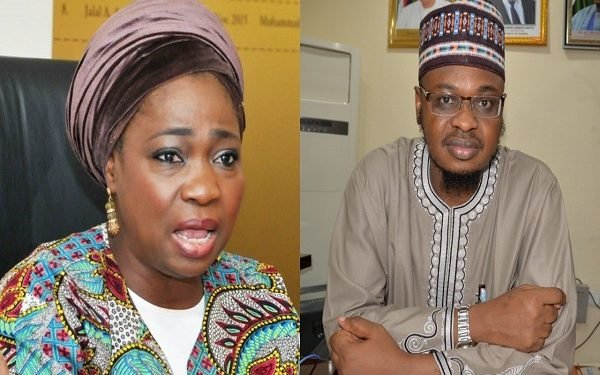 Abike Dabiri-Erewa and Isa Pantami fought over accommodation
The Peoples Democratic Party (PDP) on Tuesday called out the Minister of Communication and Digital Economy, Dr. Isa Ali Pantami and the Chairman of Nigerians in Diaspora Commission (NiDCOM), Mrs. Abike Dabiri-Erewa who have been fighting since last week over office accommodation.
The party took a swipe at the Federal Executive Council (FEC) under President Muhammadu Buhari. The main opposition said the Executive Council had become cancerous, disorganised and chaotic.
The party said the current FEC is incapable of driving an organised, result-oriented system and as such should be disbanded.
In a statement in Abuja by its National Publicity Secretary, Kola Ologbondiyan, the PDP said its position was predicated on the hostilities among officials of the Presidency, including presidential aides, ministers and heads of agencies.
These, the party noted, had further exposed what it called a breakdown of the administration’s central command system.
The PDP described the situation as a mark of “failure by the Buhari Presidency and the All Progressives Congress (APC) to provide organised leadership for our nation”.
It added: “The PDP said a situation where officials are constantly at daggers drawn against one another in unending clashes, backbiting, betrayals, leakage of sensitive documents and internal bickering over pecuniary and political interests, in manners not different from street skirmishes of common cult groups, is unacceptable to our nation.
“It is indeed shocking that the acrimony had sunk to a situation where the Minister of Communication and Digital Economy, Isa Pantami, reportedly evicted the workers of NiDCOM from their allocated office, with guns, while Mrs. Dabiri-Erewa was on official assignment with the President.
“Currently, the newly appointed Chief of Staff to the President, Prof. Ibrahim Gambari, and the Secretary to the Government of the Federation (SGF), Boss Mustapha, are said to be at each other’s throat, with the SGF reportedly querying the decision of the President to sack the former Director of the Transmission Company of Nigeria, Mr. Usman Mohammed. The situation had degenerated into serious confusion in the Federal Executive.
“Nigerians can recall the bitter wrangling, wherein the National Security Adviser (NSA), Maj.-Gen Babagana Monguno (retd.), earlier this year, alerted that presidential responsibilities, including presiding over sensitive security matters, have been hijacked by late Chief of Staff, Mallam Abba Kyari, thereby frustrating the fight against insurgency and acts of violence ravaging our country.
“Furthermore, the Power sector is still under the stress of squabbling between the SGF and the Minister of Power, Sale Mamman, with the SGF reinstating some officials who were sacked by the minister last December.
“The nation has also not forgotten the embarrassing public fight between the First Lady, Aisha Buhari, and President Muhammadu Buhari’s cousins over rooms in the Presidential Villa, which further exposed the chaotic situation in the President Buhari-led administration.
“Before then, the First Lady had alerted the nation to a cabal that had hijacked the Federal Executive and taken over governance of our nation.
“It is sad that presidential hostilities have resulted in escalated cases of internal sabotage, including the leakage of sensitive documents, as exposed by the Head of Civil Service of the Federation (HOCSF), Dr. Folasade Yemi-Esan and recently witnessed in the embarrassing leakage of President Buhari’s draft COVID-19 speech.
“Nigerians can now see how vulnerable our nation has become and why it is extremely difficult for our country to witness any progress under the Buhari Presidency, which has also ruined all the gains achieved under the PDP.
“Indeed, no nation can achieve meaningful development under a rancorous and shambolic Federal Executive Council, as currently constituted, with the height of irredeemable division among them.
“Such a situation never obtained under the watch of the PDP in the glorious years of our nation.
“Our party, therefore, counsels President Buhari to re-direct the course of our nation’s tides by disbanding his poorly assembled and dysfunctional FEC.
“He should foreclose the parochial posturing of his administration by engaging more competent hands to run the affairs of our nation.”
Top Stories