At least six English clubs have made the list of the world's richest clubs 2020. 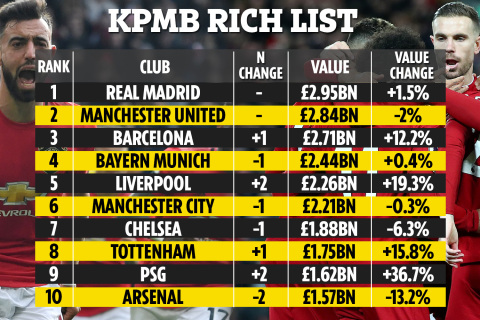 Richest clubs in the world 2020 list
Manchester United have retained their place atop the Premier League rich list - valued at £2.84billion.
The Old Trafford squad remain the second-most valuable club in Europe, according to KPMG.
In a turbulent year, the Red Devils actually saw their value decrease by 2 per cent.
And it was recently revealed they are in crippling debt, not helped by the coronavirus pandemic - with their monies owed rocketing by £127.4million to a total of £429m.
But the big story came out of Anfield, as Liverpool leapfrogged Manchester City and Chelsea to sit second in England and fifth in Europe.
The European champions and Premier League champions-elect saw a monster 19.3 per cent bump to their value.
The Reds are now worth an astronomical £2.26bn, ahead of City (£2.21bn) and Chelsea (£1.88bn) - with the Blues seeing a 6.3 per cent decrease in their value.
Top of Europe, still, are Real Madrid - valued at £2.95bn after seeing a small boost in the past 12 months.
Barcelona (£2.71bn) and Bayern Munich (£2.44bn) slot in below Man Utd.
Tottenham and Arsenal both also make the top ten, but enjoyed very different years.
Spurs saw a 15.8 per cent bump in their value, skyrocketing into eighth in Europe - a one spot rise - at £1.75bn.
But the Gunners slipped into tenth, dropping two spots below their North London rivals and Paris Saint-Germain.
The Ligue 1 champions saw the biggest percentage boost in the whole top ten, with their stock rising by 36.7 per cent.
Arsenal saw a 13.2 per cent slip, now worth just £1.57bn, with the next-most-valuable Premier League side West Ham in 18th, closely followed by 19th-placed Leicester.
However, next year could see all teams' value slide drastically thanks to the coronavirus pandemic.
All clubs in Europe have faced huge financial problems owing to the lockdown, with some players and staff told to take a pay-cut or even furloughed.
Source: Sun UK
Top Stories

Enugu Farmers Living In Fear As Herdsmen Take Over Their Farmlands