A nurse who was almost lynched after being mistaken for a baby thief has told her horrifying story. 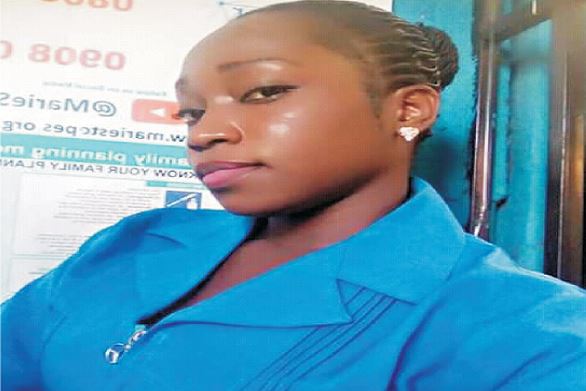 Onitsha, Upper Iweka, to be precise in Anambra State, has over the years been notorious for all forms of atrocities and nefarious activities. It’s a place where the good, the bad and the ugly congregate, twenty four hours a day.

Despite several efforts by successive governments, including the current administration, to rid the area of crime and criminality, Upper Iweka has remained a nightmare to dwellers and visitors, even security agencies. A successful navigation of the area without any incident is therefore seen by many as a cause for ‘celebration.’

This was the same area, Miss Chinwendu Okafor, an auxiliary nurse with the Mother of Mercy Hospital, met her sorry tale. Perhaps, if she had known the story would turn out sour, she would not have followed the instructions of her employer and principal.

Her employer had directed her to take a new born baby along with the father and a relative to Infant Jesus Hospital within the area, following her inability to manage the complications surrounding the baby’s birth at her facility.

Efforts to control the baby’s breathing pattern, which changed immediately she was delivered, including cutting of the placenta, had culminated in a need for intervention.

Hear her pathetic story: “The midwife and owner of the Mother of Mercy Hospital, Immaculata Egbuodike, had detailed me to take the baby with the father to another hospital, where it would be placed on oxygen, since it was not breathing well in our hospital.

“We drove to the hospital in the vehicle of the baby’s father, but when we got there, the nurses on duty said I and the father should wait outside the gate.

“They later came and told us they’d examined the baby but that they could not reach their doctor due to network challenge.”

“The father then demanded that they released the baby to him, so he could try another hospital and save its life.

“However, as we drove to another hospital within the area, he requested that I alighted from the car with the baby, so he could look for a convenient place to park and later join us.

“It was while I was waiting for him that some passersby and some people selling fruits in the area accosted me, demanding to know how I came by the baby.

“I explained to them that I was waiting for the father, who had gone to park his car, but all my explanations fell on deaf ears, as they accused me of lying.

“Before I knew it, people started gathering and shouting that I stole the baby. Those with phones started snapping and recording videos of me while I cried for help,” she sobbed.

The angry mob quickly rushed and called a female police officer to the scene.

“The officer, on arriving, asked me to shut up and follow her to the police station at Okpoko. I was about following her to the station, when the father of the baby arrived.

“Amazed at the scenario, he demanded to know what was happening. But the policewoman and two other officers, who later arrived the scene, insisted we went to the police station. Even our explanation that the baby was in critical condition and in need of urgent medical attention fell on deaf ears.

“At Okpoko Police Station, one of the officers had sympathy on the baby and ordered that it be taken to a hospital, but too much time had been wasted and the baby later died at the hospital. The medical doctor said blood was not coming out from its vein.

“I wept bitterly but I blamed the policewoman for not allowing us take the baby to the hospital in time. I even told her to handcuff me while we gave the child priority attention; that she could even arrest and prosecute me if she found that I stole the baby, but she turned deaf ears. She later started consoling me and the father, but like they say, it was medicine after death.

Need to clear my name

“I am calling on the government and security agents to investigate the matter in order to clear my reputation, which is already destroyed by the trending video,” she said.

The father of the baby, Mr Uchenna Ugwuogu, a native of Nsukka, Enugu State, expressed sadness over the attitude of the female police officer, blaming her for the death of the baby.

He however confirmed that the child was never stolen by the nurse as alleged.

“If not for the delay caused by that police officer, my baby wouldn’t have died. I and my wife are really in pain but I also pity the innocent nurse whom they almost killed.

“I expected the policewoman to rescue her when she got there but rather, she insisted we followed her to the station.”

On her part, the midwife and owner of the Mother of Mercy Maternity, Onitsha, Immaculata Egbuodike, described the victim as a dedicated staff, saying she was innocent of the allegations.

She said, “Chinwendu is one of my best staff; that was why I handed the baby to her to go with the father to the other hospital, as the baby was not breathing well. I was surprised to hear that she was accused of stealing the baby.”

A media practitioner in the state, Jude Geoman, regretted that the pathetic story would not spark up a conversation about the state of the nation’s healthcare system.

He said, “A hospital has no incubator. A father had to transport his baby to another hospital and a nurse was almost lynched. Unfortunately, everybody who is responsible for providing the most basic health infrastructure for the masses does not patronise our hospitals.

“It is so touching that we are busy chasing shadows while our children are suffering the effects of corrupt leadership.”

While praying for the repose of the soul of the innocent baby, Geoman described as unimaginable the pains the parents would be going through.

Another resident, who simply identified himself as Mr. Nwangwu, blamed the father for what he described as ‘lacklustre disposition.’

“Going by Chinwendu’s story, the baby’s father would appear not to have shown the natural assertiveness, even desperation, expected in such a situation to procure help for his obviously ailing baby.

“He shouldn’t have been so terrified by the mob that he almost abandoned his baby’s fate to the dutiful nurse.

Reacting, the police spokesperson, Haruna Mohammed said the nurse was innocent of the allegation.

He said, “The fact of the issue is that a woman delivered a premature baby through CS and the doctor instructed a nurse to take the baby in company of the father, to another hospital where it would be kept in an incubator.

“They were intercepted by some youth who suspected that the nurse stole the child. The youth were about to lynch her when a police patrol team attached to Okpoko Division rescued and brought her to the station for discreet investigation.”