You Shall Lose Everything You Ever Cherished In Life - Nollywood Actress, Kemi Afolabi Curses Bloggers


A young lady has been caught stealing yet again at a shop she previously stole from in Warri. 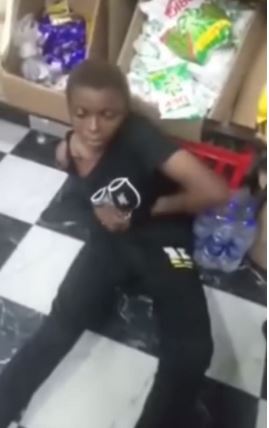 An unidentified lady got more than she bargained for after was allegedly caught stealing from a shop she stole from the previous day.

In the video which has gone viral online, the lady who was begging those who caught her in the act said "she was frustrated". She also wasn't clear on what happened to her mother and its correlation to the theft.

One of those who apprehended her was however heard asking her why she didn't go into "commercial sex like her mates".

Married Woman Traces Cheating Husband To Hotel, Finds Out Her Blood Sister Is The Side Chick