The faceoff between Adams Oshiomhole and Governor Godwin Obaseki has taken a new turn after a court said the APC chairman can't be arrested and prosecuted. 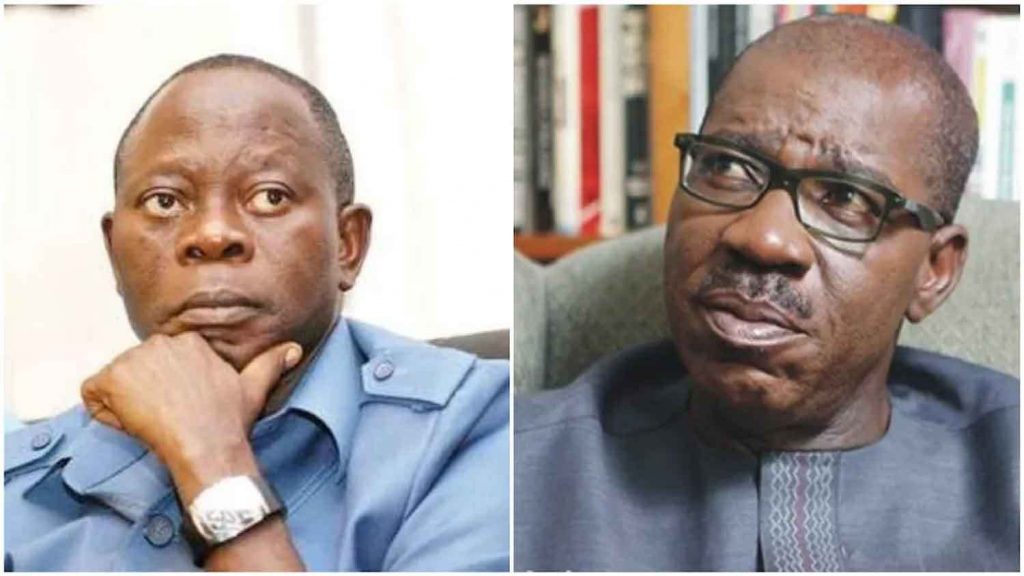 Adams Oshiomhole and Godwin Obaseki
The National Chairman of the All Progressives Congress, APC, Comrade Adams Oshiomhole can sleep with eyes closed after a Federal High Court in Abuja on Monday stopped Edo State Government and Governor Godwin Obaseki from arresting and prosecuting the former Governor.
The court granted an interim injunction restraining Governor Obaseki from arresting and prosecuting Oshiomhole over indictment in a white paper submitted to the State government.
The presiding judge, Justice Ahmed Mohammed, in a ruling, said the restraining order should subsist, pending the determination of whether or not the Federal High Court has jurisdiction to hear the suit filed by Oshiomhole seeking to stop his prosecution.
In a white paper, Oshiomhole was indicted for corruption by a panel of inquiry set up by Governor Obaseki and headed by Justice Oyomire.
The APC National Chairman ran to the court after the panel recommended his arrest and prosecution in the white paper.
Lawyer to the former Labour leader, West Idahosa, prayed the court, via an ex-parte for an order restraining the respondents.
Inspector General of Police, the Attorney-General and Commissioner of Justice of Edo State, Justice J. Oyomire, and the Department of State Services (DSS) were also listed as respondents in the case.
Lawyer to the Edo Government Alex Ejeiseme (SAN) had challenged the court jurisdiction and sought to stop the ex-parte order from being granted in a motion of preliminary objection he brought before the court.
Justice Mohammed, after listening to arguments by lawyers to parties in the case, ordered the respondents to stay action, as it relates to the subject of the case, pending the determination of whether or not the court has jurisdiction.
The judge said: ‘’An interim order is hereby made restraining the prosecution of the applicant pursuant to the report submitted to the 1st to 3rd respondents or any white paper, pending the determination of the issue of jurisdiction raised in the 1st to 4th respondents notice preliminary objection.’’
Mohammed further directed the APC Chairman’s lawyer to serve court documents on the case on all the respondents within 48 hours.
The matter was adjourned for further hearing till June 17, 2020.
Top Stories