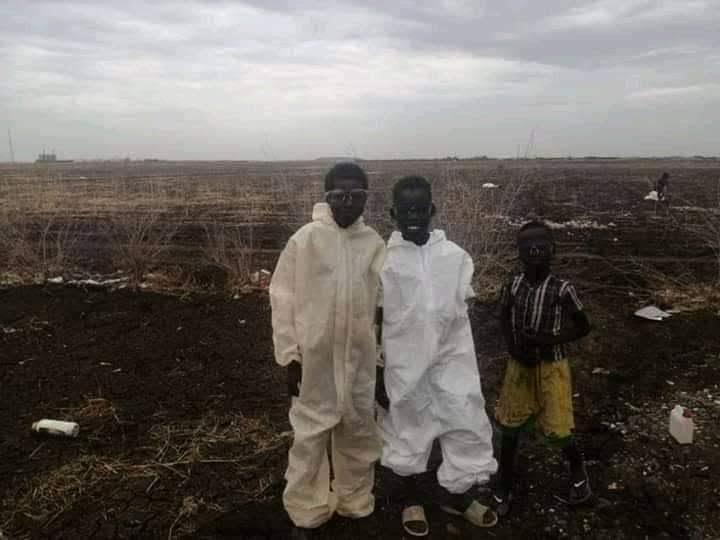 Children wearing discarded PPEs
The Federal Government has borken it silence after photographs of two children wearing discarded Personal Protective Equipment, PPE surfaced on social media on Monday.
Chairman of the Presidential Task Force on COVID-19, Boss Mustapha said though it was not certain the pictures were taken in Nigeria, such improper disposal of PPE could spike the number of coronavirus infection.
Mustapha gave the warning during Tuesday’s press briefing, in reaction to the photographs of three children wearing used PPEs that trended on social media.
Mustapha described this as a dangerous development which required public education.
He called on frontline health workers to ensure used PPEs are properly disposed of.
Mustapha said, “Shortly after the briefing of 1st June, 2020 [Monday], social media was trending with the photograph of two children wearing discarded PPEs (although it is not certain if the photograph was taken in Nigeria).
“Significantly, that photograph represents a dangerous development.”
He said the development underscores the need to engage the community in more risk communication, and diligence in the disposal of used PPEs on the part of our frontline workers and the administrators.
He added, “Above all, the photograph has left us to imagine what the impact would be, if schools were to be open and they attended school after being exposed so dangerously.”
According to him, those children represent a clear danger to themselves, family and the immediate community.
Mustapha called on all the health authorities to make sure that waste disposal is done properly so as not to create opportunities for increasing the chances of spreading the coronavirus.
Top Stories