A controversial supporter of Donald Trump, Candace Owens has been lambasted over an insensitive comment she made about George Floyd. 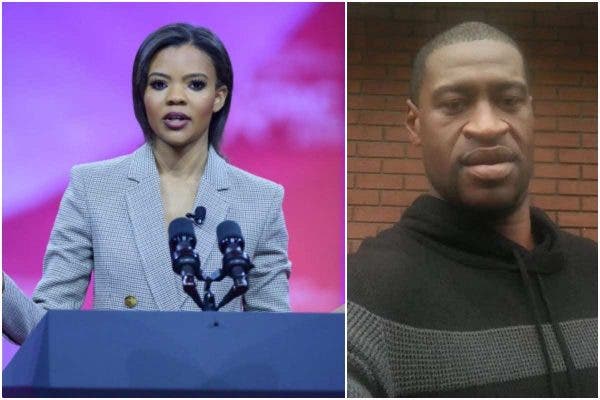 Candace Owens has been slammed over her insensitive comment on George Floyd's death
Conservative activist and Trump supporter, Candace Owens has attracted serious backlash online after saying that late George Floyd is not a hero.
Mr Floyd was an unarmed black man who died after a Minneapolis police officer kneeled on his neck for more than eight minutes as he told them “I can’t breathe”.
Floyd’s death has sparked mass protests across the US, with governors in several states calling in National Guard troops in an attempt to maintain order.
In a now viral Facebook video, Candace Owens stated that she does not support him, and neither does she view him as a martyr. She titled the video;
“Confession: I DO NOT support George Floyd and I refuse to see him as a martyr”.
She said in the controversial video;
“I do not support George Floyd and the media’s depiction of him as a martyr for black America.”
Explaining that “it has been weighing very heavily on my heart and on my mind,” she adds, “there was so much pressure for me to go with the popular opinion about who George Floyd was.
“We are being sold a lot of lies at the detriment to the black community, at the detriment to the white community and at the detriment to America as a whole.
“Our culture is unique from other communities because we are the only community that caters to the bottom denominator of our society.
“Not every black American is a criminal. Not every black American is committing crimes.
“But we are unique in that we are the only people that fight and scream and demand support for the people in our community that are up to no good.”
Candace Owens also took a poke at the father of three’s criminal past, while also claiming he was high as at the time of his death.
The controversial commentator also tweeted:
“Black lives only matter to white liberals, every 4 years, ahead of an election.
“I’m so sorry to those of you that thought otherwise.”
Confession: #GeorgeFloyd is neither a martyr or a hero. But I hope his family gets justice. https://t.co/Lnxz0usrp5
— Candace Owens (@RealCandaceO) June 3, 2020
See some reactions to her video below;
@doreaves: I have NEVER in my life heard of someone dehumanize a person like this. Because of his past he deserved to die? I am glad “second” chances are not owned by you. The BLACK com believe, hope and try to help ppl get up from the ground and make something out of their lives…
@ElliotVAltair: Officer Chauvin who murdered #GeorgeFloyd had 17 prior complaints. How about instead of always digging through the record of the victim to make them out to be the villain, fire every officer with a history of police misconduct. Clean your house, and the streets will clear.
@unrooolie: Excuse me!??! Black America is the only community that will defend the bottom denominator of our society!? May I present to you a statute of Robert E Lee a man is who opposed racial equality has a giant statute in American soil. We have countless statues of slave owners
@jennybenny72: What did she say that was totally offensive? I’m genuinely curious. She explicitly stated that the murder was unjustified and that the cops should rightfully be imprisoned. Based on these definitions, do you truly associate George Floyd with “martyr” or “hero”?
Top Stories