A police sergeant has found himself in serious trouble after killing an inspector in Lagos. 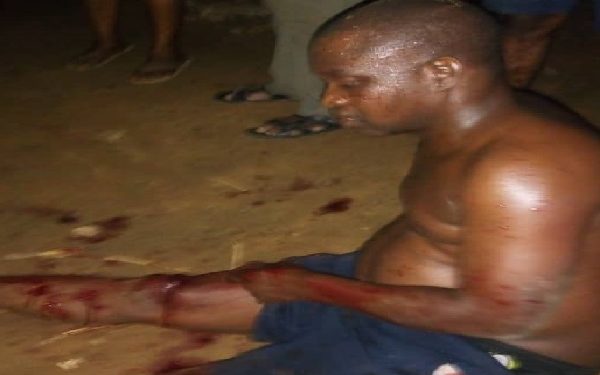 The Police sergeant was arrested after killing inspector in Lagos
A drunken Police Sergeant has been arrested for allegedly stabbing an Inspector to death and injuring another victim, TheNation has reported.
It was gathered that the unnamed Sergeant is currently being detained at the State Criminal Investigation and Intelligence Department (SCIID) Yaba after the Inspector identified as Francis Adekunle died in the hospital Monday morning.
It was gathered that Sergeant went berserk at the weekend after drinking alcohol at a nearby bar and returned to his compound in Oke-Odo.
The Nation gathered that both the Sergeant and Inspector were tenants in a compound alongside other civilians. It was alleged that there have been several complaints against the Sergeant by other tenants whom he usually harassed.
On that night, the Sergeant was alleged to have engaged in his usual intimidation of civilians after being drunk and was chasing a man about with a cutlass when the Inspector, said to be attached to the Special Protection Unit (SPU) 2 Ikeja, intervened.
Not minding that Inspector Adekunle was his senior, the Sergeant descended on him with the machete, leaving several cuts on his legs and body.
It was gathered that the victim was rushed to the hospital where he died Monday morning.
Police sources who hinted on the issue appealed to Commissioner Hakeem Odumosu to bring the Sergeant to justice, noting that he has been a threat to his neighbours and the entire vicinity where he lived.
“He drives a fully tinted Toyota Camry car with no plate number. He was reported at the Okeodo, Ile Epo Police Station for his previous actions but nothing was done to call him to order before he perpetrated this evil act.
“I saw Inspector Adekunle this evening on his hospital bed. He was still alive then. Unfortunately, I received a call from his brother, Ojo Adekunle that he just passed on.
“The doctor also confirmed his death. I am using this medium to appeal to the CP Hakeem Odumosu to do the needful and prosecute this killer Sergeant that has been terrorising everyone in the vicinity. This kind of character should not be in the Nigeria Police,” an officer lamented.
Police spokesman Bala Elkana confirmed the arrest of the Sergeant, adding that the CP has ordered investigation into the incident.
“This did not happen in the barracks. They both stay in town with other civilians. They were neither on duty nor anywhere near police facility when it happened. I have to correct that impression because a lot of people have been calling me to say it happened inside barrack.
“No matter where it happened, a crime was committed and the suspect is in custody. I will issue a statement soon on this incident,” he said.
Top Stories