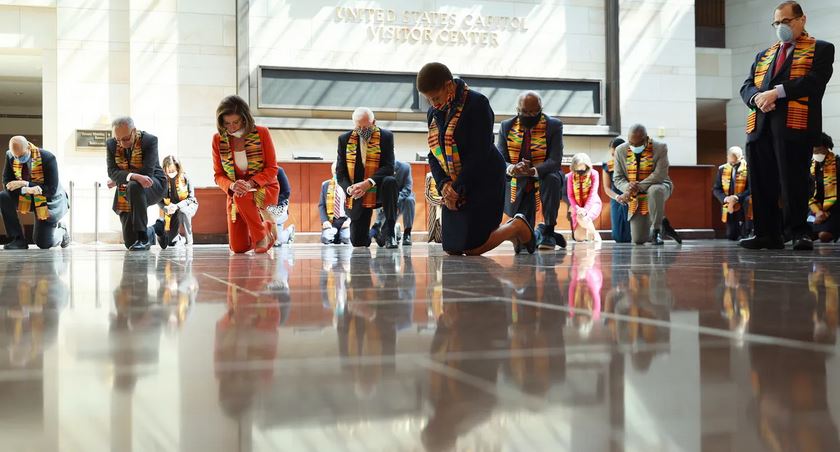 Mr Floyd was an unarmed black man who died after a Minneapolis police officer kneeled on his neck for more than eight minutes as he told them “I can’t breathe”.

Floyd’s death has sparked mass protests across the US, with governors in several states calling in National Guard troops in an attempt to maintain order.

Lawmakers, wearing African kente cloth scarves, knelt in the Capitol Visitor Center before holding a press conference to unveil their legislation in response to almost two weeks of nationwide protests over police brutality toward African Americans.

The lawmakers knelt for 8 minutes and 46 seconds, the length of time that now-former Minneapolis police officer Derek Chauvin placed his knee on Floyd’s neck, which resulted in Floyd’s death on Memorial Day.

Democrats made the gesture made before proposing legislation for comprehensive police reforms.

Some of the provisions of the Justice in Policing Act of 2020 would limit qualified immunity protections, create a national police misconduct registry, ban chokeholds, restrict the transfer of military-grade equipment to police departments and make lynching a federal hate crime.

However, it does not include a proposal to defund the police as many who are protesting have advocated.

Congressional Democrats wearing Kente clothe as they take a knee to observe a nearly nine minute moment of silence for #GeorgeFloyd at Emancipation Hall at the U.S. Capitol.