The women reportedly stole the child from Kakuano, Rivers State, and came to Imo to sell him. 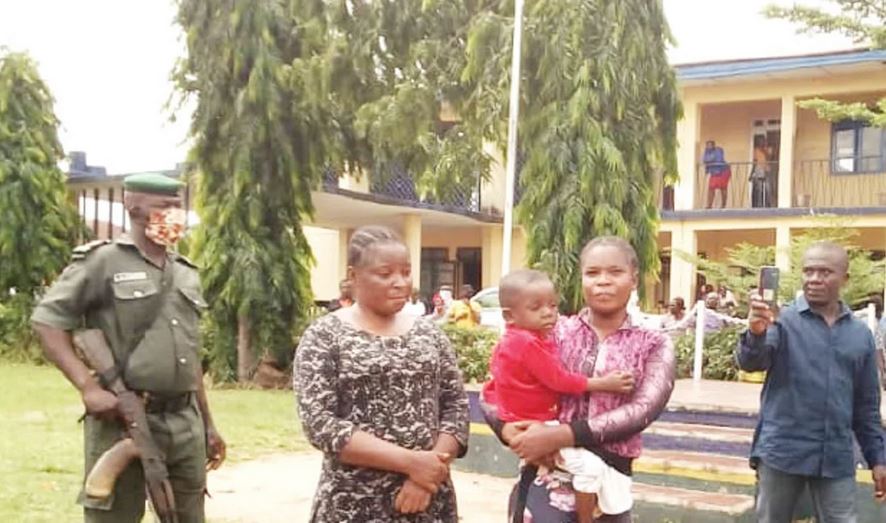 The women with the stolen boy

The police in Imo State have arrested Victoria Joseph, 28, and Joy Ugorji, 33, for allegedly stealing a two-year-old boy from Rivers State, The PUNCH reports.

The victim is a nephew of one of the suspects, Joseph.

Parading the suspects on Tuesday, the Imo State Commissioner of Police, Isaac Akinmoyede, said they stole the child from Kakuano, Rivers State, and came to Imo to sell him.

The CP said operatives of the Anti-Vice Unit of the command intercepted the suspects and recovered the baby during a stop-and-search.

He stated, “On May 30, 2020, operatives of the Anti-Vice Unit of the command, while on stop-and-search, intercepted the suspects with a boy of about two years.

“On interrogation, they confessed that they stole the child from Kakuano, Rivers State, and brought him to Imo State for sale.

“The boy has been safely kept at the motherless babies’ home, while efforts are being made to locate the parents; investigation is ongoing.

“The command, therefore, enjoins members of the public, whose child was stolen or who know anyone that has lost his child recently, to call the state police control room number or the PPRO.”

Joseph told journalists that she stole the boy from his grandmother.

She said the boy’s mother was her relative and that she took advantage of her familiarity with the family to steal him.

The suspect stated that she and her accomplice were in Imo State to look for a buyer for the boy.

She confessed that she had sold other children in the past.