US President was not spared during George Floyd's funeral as he was attacked by the dead man's niece. 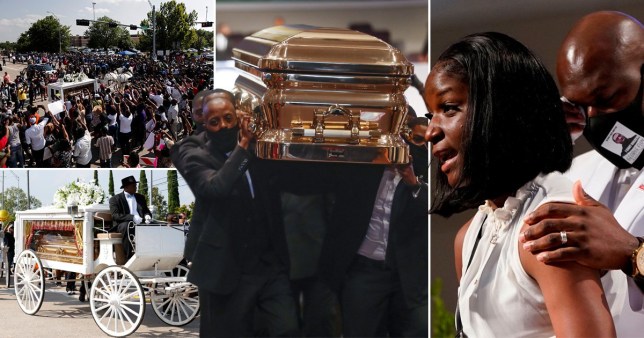 Brooke Williams attacked President Trump during burial of George Floyd
Brooke Williams, George Floyd’s niece yesterday attacked Donald Trump at her murdered uncle’s funeral.
According to Metro UK, referring to her uncle by his middle name, Perry, at Tuesday’s funeral in Houston, Texas, Brooke Williams hit out at racism in the US, saying: ‘As long as I’m breathing justice will be served for Perry. ‘My uncle was a father, brother, uncle and a cousin to many. Spiritually grounded, an activist, he always moved people with his words. Those officers showed no remorse as they watched my uncle’s soul leave his body. ‘He begged and pleaded many times just for you to get up, but you just pushed harder.
‘Why must this system be corrupt and broken? Laws were already put in place for the African American system to fail. These laws need to be changed. Please, no more hate crimes. ‘Somebody said Make America Great Again, but when has America ever been great?’ Williams was referring to President Trump’s 2016 election slogan – Make America Great Again (MAGA) which he has continued to repeat since being elected to office.
While President Trump condemned Floyd’s killing, he was blasted for stoking up riots in the wake of the death and echoed the words of a racist former police chief when he tweeted: ‘When the looting starts, the shooting stars.’
Attacking the men accused of killing her uncle, Williams continued: ‘Those four officers were literally on him for nine minutes and none of them showed they have a heart of soul, this was not just murder – this was a hate crime.’
Top Stories