It has been disclosed that Bucumi Nkurunziza, wife of late President of Burundi is fighting for her life after contracting coronavirus. 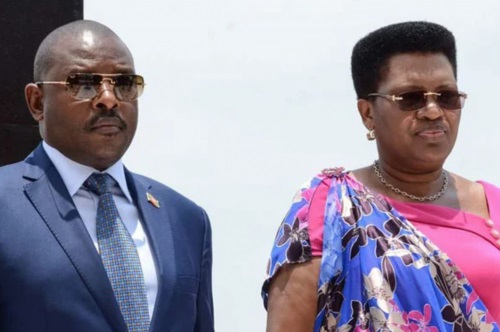 Pierre Nkurunziza and his wife Bucumi
It has been revealed that after Burundi President Pierre Nkurunziza succumbed to a heart attack in Bujumbura, his wife, Denise Bucumi Nkurunziza, is still receiving treatment at the Aga Khan University Hospital, in Kenya's capital Nairobi, TheNation reports.
Ms Nkurunziza had attended a volleyball match on Saturday afternoon and was taken to a hospital that evening after falling ill.
The former First Lady is receiving treatment for an underlying condition after contracting the coronavirus.
She received a message on Tuesday from President Uhuru Kenyatta, who sent a message of condolence and comfort to the people of the Republic of Burundi following the demise of President Nkurunziza.
In his message, President Kenyatta termed the outgoing Burundi leader as an outstanding regional counterpart who served his country with distinction as Head of State and Government and worked tirelessly for the peace and stability of his country and the Great Lakes Region.
The President said death had robbed East Africa of a prominent leader whose contribution to the integration and progress of the region will be sorely missed and prayed for God's calming comfort as the family, people of Burundi and East Africans mourn their departed leader.
Although he appeared to recover on Sunday and spoke to those around him, he suddenly deteriorated on Monday morning. He then suffered a heart attack and despite an immediate resuscitation attempt, doctors were unable to revive him.
Mr Nkurunziza died at a hospital in Karuzi, eastern Burundi. Ms Nkurunziza was airlifted to Nairobi on Thursday morning following a government-to-government agreement using Amref's acquired portable isolation chamber, which is an innovative medical unit and transportation system designed for optimal safety during patient loading and transport.
A source said the unit is a single patient isolator made of cleanable materials and is compatible with leading ambulance-stretcher systems as well as with most mechanical ventilator circuits.
"Due to our patient confidentiality policy, we cannot share any information with the public," the hospital's communication department had stated.
The government said there would be seven days for national mourning from Tuesday and that flags would be flown at half-mast.
Top Stories