Mayowa was alleged to have beaten the victim with sticks and burnt several parts of his body with lighted cigarettes. 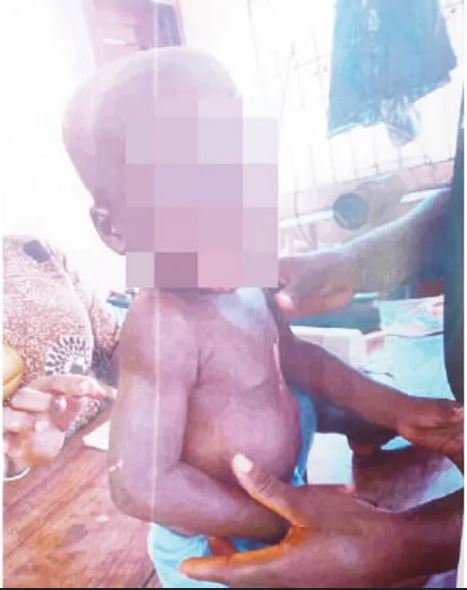 Mayowa was alleged to have beaten the victim with sticks and burnt several parts of his body with lighted cigarettes.

The police prosecutor, Abiodun Fagboyinbo, explained that the incident happened on May 24, 2020, around 1.30pm in Okinni.

Fagboyinbo added that the defendant exploited the victim; an act he noted was injurious to the welfare of the child.

A picture of the victim obtained from security sources showed injuries on his body as a result of the torture he was allegedly subjected to by the defendant.

Mayowa, who had no legal representation, however, pleaded not guilty to the charges.

He said he was under a spell and identified his mother as the person behind his ordeal.

Mayowa stated, “I have five children from five women. I know I am under a spell. I have consulted several pastors, who told me that my mother is responsible for my situation. I am a commercial driver.

“The boy I assaulted is my son from the fourth woman. When his mother got pregnant, we got separated due to the insistence of her family that she should not marry me.

“We later settled our issues and we started living together this year. Ever since we reunited, my son would not allow me to carry him. I hate him so much and on several occasions, I found myself beating the boy mercilessly.”

Magistrate Modupe Awodele ordered that Mayowa should be remanded in the Ilesha Correctional Centre and adjourned the matter till July 14, 2020, for hearing.