Displaying placards with various inscriptions on their plight, the retirees accused the Governor Hope Uzodinma administration of insensitivity. 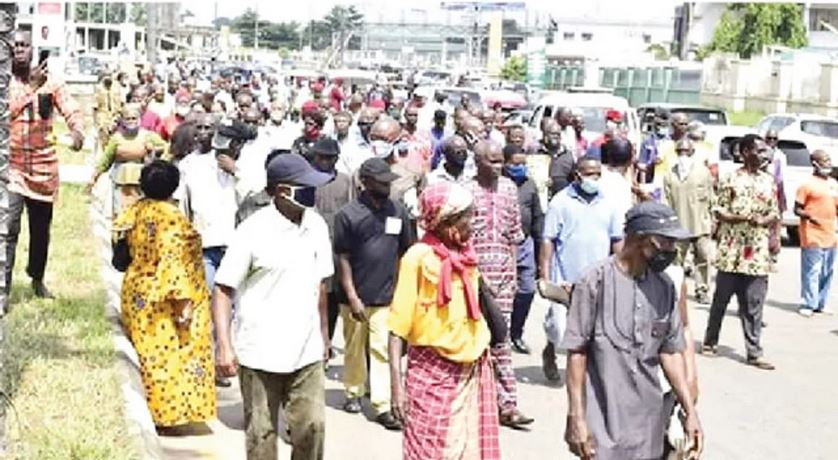 Some of the pensioners

According to The PUNCH, some retirees, on Tuesday, took to the streets of Owerri in protest against the Imo State Government’s inability to pay them their pensions and gratuities since February.

Displaying placards with various inscriptions on their plight, the retirees accused the Governor Hope Uzodinma administration of insensitivity.

The pensioners, who attempted to invade the Government House, were resisted by security personnel, who formed a barricade.

Unable to access the Government House, the pensioners blocked the roundabout leading to the premises and prevented movement in and out of the compound.

Briefing journalists, the Chairman, Imo State Pensioners’ Intervention Committee, Mr Iyke Ohaneje, said efforts made by the body to ensure the payment of the outstanding pensions and gratuities had been frustrated by the office of the accountant-general of the state.

He said 42 pensioners had died as a result of the non-payment of their stipends.

The retiree said they were on the streets to beg for alms.

“As at the last count, 42 members of this association have died of hunger, excluding the ones in the rural areas. Government agents have frustrated every move we have made to get our pensions paid.”

When contacted, the Senior Special Assistant to the Governor on Media, Modestus Nwamkpa, said the pensioners would soon be paid.

He stated that taking to the streets would not solve the problem and asked the senior citizens to be patient with the government.