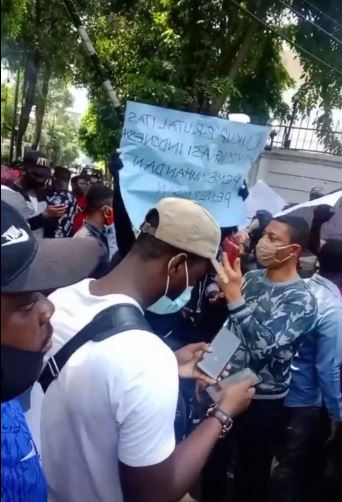 Some aggrieved Nigerians protested at the Nigerian Embassy in Jakarta today, June 25, over an alleged discrimination and targeted raids by Indonesian immigration officers.

The Nigerians who held up placards and were heard chanting "enough is enough" during the protest, accused Indonesian Immigration Officers of carrying out targeted raids against them and also killing some of their compatriots for not giving them the money they want.

The protesters who accused authorities in the Nigerian Embassy of doing nothing destroyed properties at the consulate in Jakarta.

Here is a video from the scene of the protest;

Nigerians protests against alleged discrimination and targeted raids by Indonesian immigration officers. The protest is currently ongoing at the Nigerian Embassy in Jakarta