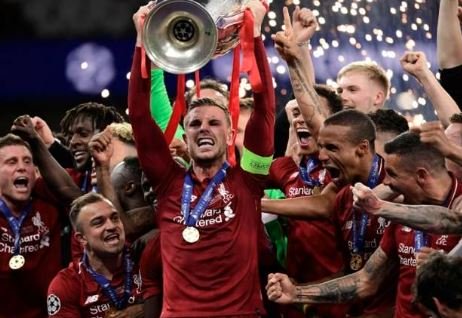 Liverpool have been crowned EPL champions
Thirty years of hurt came to an end for Liverpool when they were confirmed as Premier League champions on Thursday courtesy of second-placed Manchester City’s 2-1 defeat by Chelsea.
The result at Stamford Bridge means Liverpool have an unassailable 23-point lead over City with seven games left.
Liverpool were last champions of England when they won the old First Division title in 1989-90 after which a decline in fortunes saw Manchester United and Arsenal, then Chelsea and Manchester City seize power.
Manager Juergen Klopp has rekindled the Anfield flame though and delivered the club’s 19th top-flight title, one behind arch-rivals United’s record of 20, after finishing runners-up to City in a thrilling race last season.
As the Chelsea game moved into stoppage time at an empty stadium in London, 350km away outside Anfield Liverpool fans began lighting red flares as the celebrations began in earnest.
In the last 12 months Liverpool have won the Champions League, the UEFA Super Cup and World Club Cup, but regaining their status as top dogs in England, something that was almost a given in the 1970s and 1980s, was the priority. 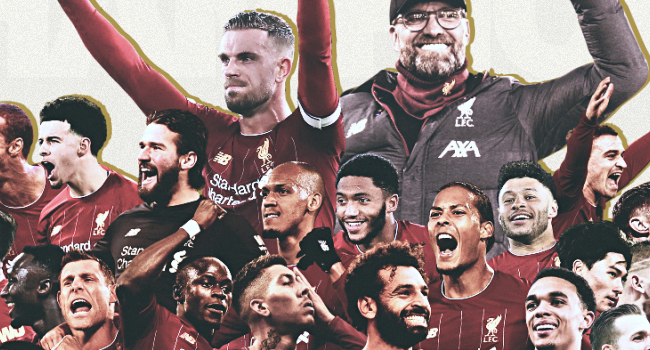 “Juergen has been fantastic and epitomises everything Liverpool Football Club stands for,” Kenny Dalglish, manager of the 1989-90 title-winning side, told BT Sport.
“And it’s not just a one-off, last year they came within a point of it and this year they have only lost once.
“Onwards and upwards, I think they have a lot more happy days to look forward to now.”
Despite the COVID-19 pandemic forcing a three-month suspension of the season and delaying Liverpool’s coronation, they have won the title with a record seven games to spare.
They eclipsed the record jointly held by Manchester United (2000-01) and Manchester City (2017-18), who sealed their respective titles with five games left.
Had it not been for the unprecedented stoppage Liverpool were on course to smash the record for the earliest league title. Instead they are now the first team to lift the coveted trophy as late as June.

Liverpool ended last season with nine consecutive league wins and, after claiming the Champions League, began the new campaign in relentless fashion to leave all of their rivals trailing in their wake.
With 28 wins and just one defeat in 31 games, Liverpool have set a record-breaking pace and were 25 points clear in February — the biggest lead in Premier League history.
When they beat West Ham United that month it was their 18th successive top-flight win, matching Manchester City’s record, before their hopes of an unbeaten season were dashed by a 3-0 defeat at Watford, a result that was merely a blip.
Leading the charge has been Mohamed Salah, the Egyptian forward who is the first Liverpool player to score 20 goals in all competitions in three consecutive seasons since Michael Owen at the start of the millennium.
Salah scored twice on Wednesday as Liverpool thrashed Crystal Palace 4-0 at Anfield — a result that meant City had to beat Chelsea to delay the inevitable for a while longer.
City were the first team to breach the 100-point barrier in the Premier League two seasons ago but Liverpool are on course to shatter that mark, as well as records for most points at home (55) and most wins in a season (32).
-Reuters
Top Stories