Nigerians have taken to social media to attack Daddy Freeze after an old video of him with Hushpuppi re-emerged. 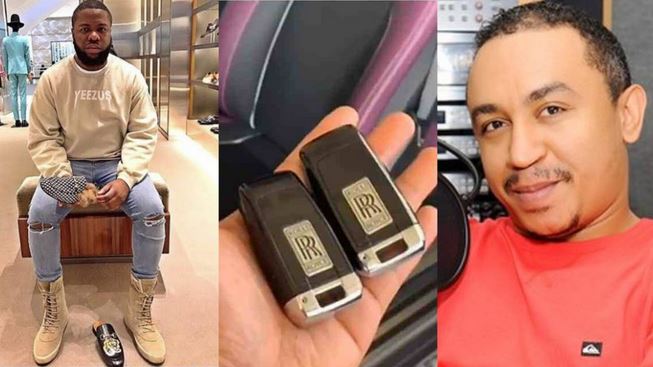 A video on Thursday went viral on social media showing Daddy Freeze sometime in 2019 dining with Hushpuppi and his gang who are currently being charged for allegedly defrauding over 1.9 million victims to the tune of $435.6 million.

In the video, Daddy Freeze could be heard laughing and mocking legit income earners after Hushpuppi said his driver collects N700,000 monthly salary.

“Hushpuppi’s driver collects 700,000 in a month, yet people abusing him on social media are working as houseboys with a pay of N35,000,” Freeze said.

His comment has since stirred reactions from Nigerians especially since the vocal OAP known for criticizing pastors for their wealthy lifestyle has maintained silence over Hushpuppi’s arrest.

@OgbeniDipo “If it is to abuse RCCG and Winners Chapel, Daddy Freeze would have been everywhere today dancing and singing like Dino Melaye. Today, he is silent. Not even a simple condemnation of fraud.”

@Olufemiolubodun “I do not know what is more hypocritical than drag pastors for collecting offerings and then dine with internet fraudster.”

@TheIfedolapo “Daddy Freeze who is a lion when it comes to attacking pastors became camera-hypeman for Hushpuppi. Two type of frauds; different loyalties.”

@DrOlufunmilayo “Daddy Freeze will drag pastors for fraud. Same person is in this video laughing with Hushpuppi. We must drag fraudsters, whether pastors, politicians or yahoo boys.”

“Since all of you are scared, I will help you say it.

”Daddy Freeze is a complete disgrace.”

@Waffiran “Daddy Freeze was eating and drinking with Hushpuppi, he would still use that same mouth to drag some pastors. Blood Hypocrite.”

@NeduNaija “Daddy Freeze calls himself “Founder of the Free Nation in Christ. He’s far worse than the pastors he tears into pieces everyday.”

@OwuhKingsley “Where are you now Daddy Freeze? Laughing and insulting hard-working people not begging HUSHPUPPI for job. Where is the driver and cleaner now?

“This is how cheap and low you have become because of worldly wealth. FBI will soon come for you, because you ate from 1.9 victims sweat.”