Nigerian lawmaker and former governor of Ogun state, Amosun has commiserated with the family of Ajimobi. 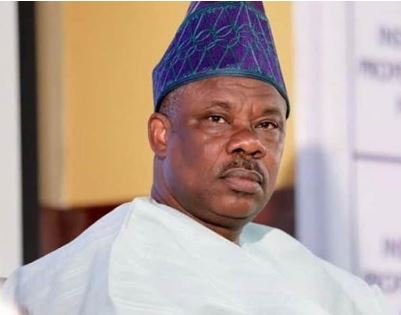 Ibikunle Amosun
Former Governor of Ogun State and Senator representing Ogun Central Senatorial District, Ibikunle Amosun, has condoled with the family of Senator Abiola Ajimobi.
Recall that Ajimobi, a former Governor of Oyo State, died on Thursday, as a result of COVID-19 complications.
In a letter he addressed to the wife of the former Oyo State Governor, Florence Ajimobi, Amosun described him as a highly skilled and educated professional, who had a successful career in the private sector, culminating in his appointment as the Chief Executive of National Oil Corporation of Nigeria.
According to Amosun, Ajimobi distinguished himself in the service of Oyo State, “where he made history as the first to be elected Governor twice just as in the Senate where he served as a principal officer in the fifth Senate.”
He described the late Ajimobi as a “good friend and brother, who would be remembered for his hard work, sense of humour and diligence in the service of humanity.”
Amosun prayed that God will grant the family of Senator Ajimobi the fortitude to bear the irreparable loss, saying, “may Allah grant Senator Ajimobi Aljannat Firdaou.”
Top Stories