Two life-sized wooden statues stolen from Igboland by whites have been sold for a staggering N85.6m in the UK. 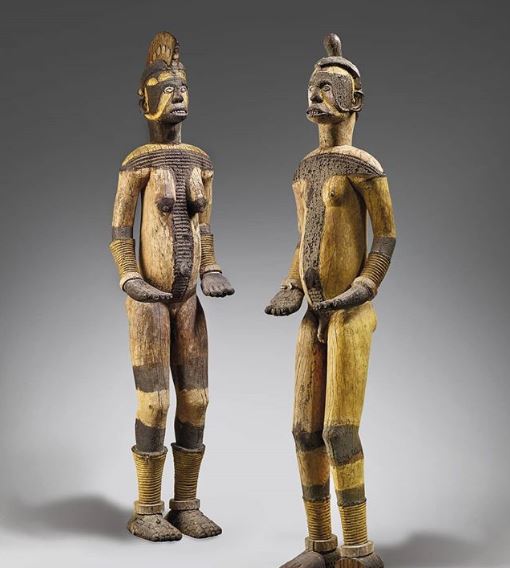 Stolen Igbo statues
A British auction company, Christie’s has been called out for selling two life-sized wooden statues stolen from Igboland for N85.6 million ($238,000) in an online auction on Monday, June 29, 2020.
The statues, labelled “A Couple of Igbo Figures Attributed to The Akwa Master”, were sold to an online bidder on Monday despite controversy surrounding how the company gained possession of them.
A Professor of African and American Diaspora Art, Chika Okeke-Agulu, had called out Christie's in a spirited campaign over the pass few weeks to stop the sale of the statues. But, the campaign failed.
He had argued that the statues were two out of dozens of local artifacts stolen from the southeast region where they were made while the Igbo natives of the region were locked in a deadly civil war with the Nigerian government between 1967 and 1970.
“These artworks are stained with the blood of Biafra’s children,” Okeke-Agulu wrote in an Instagram post on June 6.
However, Christie’s said it doesn’t believe the statues were acquired illegally by Jacques Kerchache, the French collector that owned them.
Nigeria had already passed the Antiquities Ordinance law in 1953 to prohibit the trade of stolen cultural artifacts, years before the statues and others like them were believed to have been transported out of the country.
There have been concerted efforts over the years to have African artifacts transported abroad via colonial exploitation or illegal looting returned to the continent, but success has been rare.

In a 2017 op-ed article in the New York Times, I wrote about widespread looting of art from Eastern Nigeria during the Biafran War (1967-70), and that my mother still mourns the overnight disappearance of countless alusi (sacred sculptures) from communal shrines in my hometown, Umuoji, in Anambra State. These art raids from all indications were sponsored by dealers and their client collectors mostly based in Europe and the US. It turns out that later this month the venerable Christie's will auction two of these impressive alusi (seen here) said to have been acquired in 1968-69 in situ by Jacques Kerchache (1942-2001). That is, Mr. Kerchache acquired these sculptures in the Nri-Awka area (a half-hour drive from my hometown) during the darkest years of the Biafran War. Dear Christie's, let’s be clear about the provenance of these sculptures you want to sell. While between 500,000 and three million civilians, including babies like me, were dying of kwashiorkor and starvation inside Biafra; and while young French doctors were in the war zone establishing what we now know as Doctors Without Borders, their compatriot, Mr. Kerchache, went there to buy up my people’s cultural heritage, including the two sculptures you are now offering for sale. I write this so no one, including Christie's and any potential buyer of these loots from Biafra can claim ignorance of their true provenance. These artworks are stained with the blood of Biafra’s children. #christies #warloots #biafranwar