Nigeria's anti-corruption body, the EFCC has opened up following the alleged arrest of Ibrahim Magu. 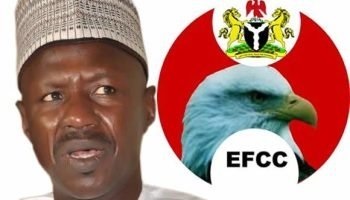 Ibrahim Magu
The Economic and Financial Crimes Commission has released a statement following the reported arrest of its acting chairman, Ibrahim Magu.
The statement reads:
MAGU HONOURS PANEL INVITATION
Acting Chairman of the Economic and Financial Crimes Commission (EFCC), Mr. Ibrahim Magu on Monday, July 6, 2020, honoured an invitation by a Presidential Panel reviewing the activities of the EFCC, at the Banquet Hall wing of the Presidential Villa, Abuja.
He was served the invitation to the Panel, while on his way to the Force Headquarters, Abuja for a meeting.
The EFCC's boss was neither arrested nor forced to honour the invitation. A member of a legal team from the EFCC is also with him on the Panel.
Top Stories