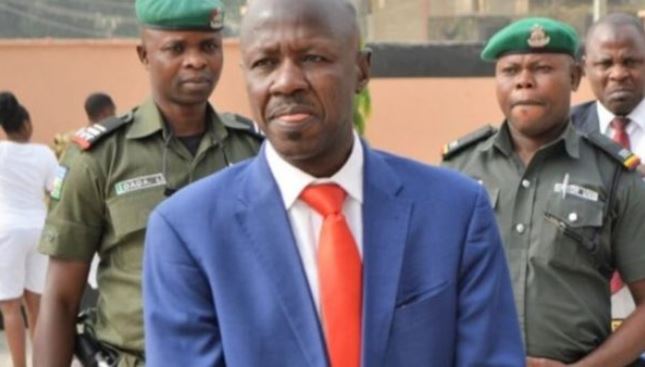 Ibrahim Magu
The Secretary of the Economic and Financial Crimes Commission, Olanipekun Olukoyede and some directors have appeared before Justice Ayo Salami-led presidential panel.
The top EFCC executives appeared before the panel to answer questions on what they know about the 21-point allegations raised by the Attorney General of the Federation, AGF and Minister of Justice, Abubakar Malami.
This comes as the investigation into the corruption allegations levelled against the acting chairman of the Economic and Financial Crimes Commission (EFCC), Ibrahim Magu, entered its fourth day on Thursday,
According to Tribune Online, the EFCC officials were said to have shed light into the investigation to enable the panel to reach a conclusion and necessary recommendations to President Muhammadu Buhari.
As the panel continued its activity on Thursday at the presidential villa, the commission has been left without a clear administrative head as the presidency is yet to formally request any of its senior officials to act in that capacity.
However, Magu, who has continued to be held in detention while his residences have been searched, is said to be faced with the prospect of being removed from the post.
Top Stories