After damning allegations were leveled against him, the Minister of Niger Delta Affairs, Godswill Akpabio has responded. 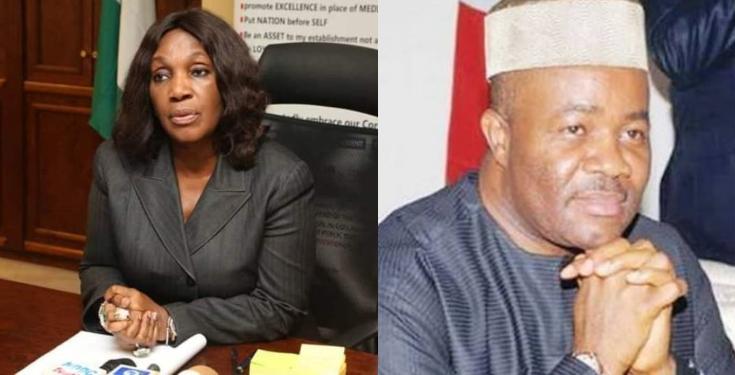 Nunieh and Akpabio
The Minister of Niger Delta Affairs, Godswill Akpabio, has opened up after Joy Nunieh, a former Acting Managing Director of Interim Management Committee of the Niger Delta Development Commission, NDDC claimed that she slapped him for sexually harassing her.
Recall that Nunieh recently made some damning revelations about the Minister and former Governor of Akwa Ibom State on his handling of the Ministry.
Addressing the press after she appeared before Senate adhoc Committee investigating NDDC, Mrs. Nunieh recounted her ordeal at the hands of the Minister before she was removed as the NDDC MD.
Among other claims, Mrs Nunieh said:
“Nobody makes any payment in NDDC without Godswill Akpabio’s approval. When we first came, on the day of the inauguration, he said to me in the car, ‘Madam MD, if you don’t do what I say, the same pen with which I used to sign your paper is the same pen I’ll use to remove you.
“He said the first thing I should do when I get to Port Harcourt is to change the dollars in the NDDC account. I was scared to do that and he claimed that I have a poverty mentality that I’m afraid of money. All of you knew that he accused me of refusing to spend money. It is strange today, it’s about money.
“After that, he came to Port Harcourt two days after the inauguration and told me that the first thing I should do was to change the dollars.”
But reacting in a television interview that has gone viral on social media, Akpabio said the former NDDC MD has character problem.
The Minister also charged his interviewer to bring the four husbands of Nunieh, whom she had allegedly divorced, to the studio to attest to her temperament.
According to him:
“I don’t want to discuss her because that’s not the job of a Minister.The last MD you mentioned, Joy Nunieh, I wish she can go to hospital, see a doctor take some injections and relax.
“I’m not saying that there’s something wrong with her, but I’m saying there’s something wrong with her temperament. Remember she had about four other husbands that she married.
“You also need to bring all the other former husbands to the studio so that you ask them questions one after the other because it looks like character.
“They will have answers to her problem. Not a professional conduct, is she a professional? They will tell you about her characters because what I’m seeing here…if somebody comes up and say something on television channel…then the whole world…Nigerians love bad news and my job is to protect the citizens of the country and the administration of Mr President.
“I must tell you that even Mr President, President Buhari was not aware of all these things because I did not want to bother because he will be shocked.”
Watch the video below:
Top Stories