A woman born in the United Kingdom has followed her boyfriend to Africa after he was deported. 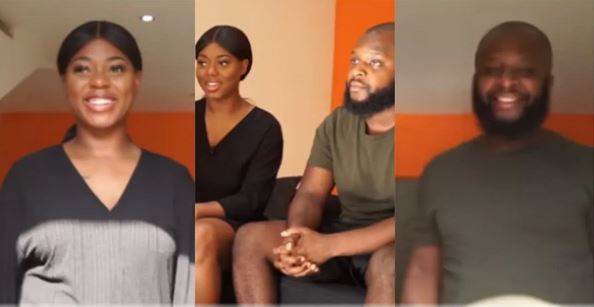 Manka Ndah followed her boyfriend to Africa after he was deported
A UK-born woman has refused to leave her boyfriend after he was deported. Instead, she followed him back to Africa.
The two lovebirds who recently moved to Ghana after the man was deported to Italy have recounted their experience prior to and during their stay in the country.
The lady, identified as Manka Ndah, a UK native with Ghanaian roots who moved into the country with her deportee boyfriend, revealed that life has been good for them after they moved to Ghana six months ago.
Speaking about their ordeal before they moved to the country, Ndah’s boyfriend revealed that he had spent over two years in jail before he was deported to his native country, Italy.
The duo were in a relationship before he was arrested and jailed for possession of drugs.
He revealed that he was in the company of a friend when he was caught for possession of drugs that were in the glove department of a vehicle. He claims the drugs were not his.
Ndah’s boyfriend further explained that his ordeal was made worse when the police found a phone in the vehicle that had messages from a drug-dealing conversation he had no hand in.
After being granted bail following his initial arrest, he was apprehended again at a hotel with the same friend he was with when he was first arrested.
Ndah’s boyfriend was arraigned before court and sentenced to jail.
He recounted this on their YouTube vlog.
In a recent interview, he disclosed that he spent over two years in jail in the UK and was later deported to Italy. The pair moved to Ghana after he was released.
After six months of being in Ghana, the couple say they are living their best lives.
The pair own their own house in Ghana and Ndah is preparing to open a beauty salon when the prevailing circumstances normalise.
Watch the video below:
Top Stories