Nigerian OAP, Smooth Genie took to his social media page to share his worse experiences he allegedly suffered after his mother remarried. 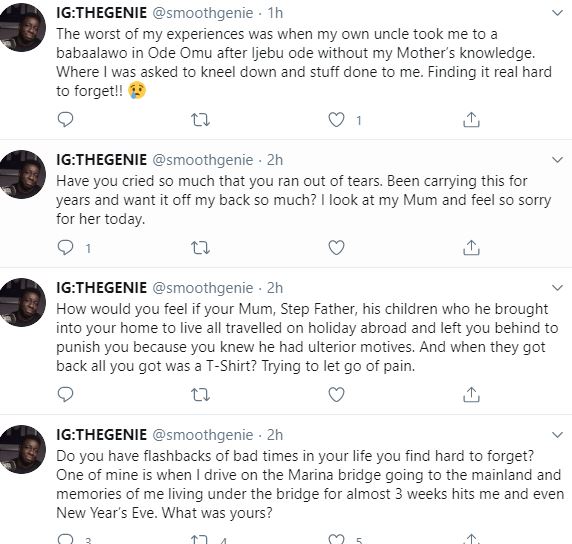 A popular Nigerian radio host has shared his heartbreaking experience on Twitter for the first time after recounting the horrific things he allegedly suffered after his mother remarried.

@Smoothgenie said he is the one who looks after his mum today, but years ago, she wasn't exactly there for him and she subjected him to child abuse.

He explained that his mother kicked him out of the home because of a man and he "lived rough on the streets for 5 years." He added that he slept under the Marina bridge for 3 weeks.

He also revealed that his mum, stepfather, and the kids his stepfather brought from his previous relationship all travelled abroad one time, and left only him at home to punish him.

He said the memories are unforgettable and he's speaking about it now because he wants it off his back.

He also told of a time his uncle took him to a herbalist (babalawo) in Ijebu Ode where things were done to him, things he says he can't forget.

Read his story below from the bottom to the top;