Governor Nyesom Wike of Rivers state has been seen confronting and ordering police officers out of Joy Nunieh's house. 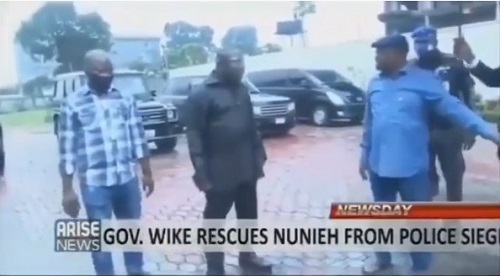 Wike seen ordering police officers out of Joy Nunieh's home
The moment Rivers State governor, Nyesom Wike came to the rescue of Joy Nunieh, the former acting managing director of the Niger Delta Development Commission, after police officers laid siege at her home has been revealed.
The Governor also ordered the police officers to vacate her home before taking her along in his official car to the government house.
Wike arrived Nunieh’s residence off Herbert Marculay Street, Amada-Flat at about 10:30 thursday morning following reports that she had been prevented from leaving her house by a team of policemen allegedly on the order of the Inspection General of Police.
The visibly angry Wike questioned the policemen on who authorised the siege and when they claimed it was from the IGP, he beckoned on Ms Nunieh to come out from her house.
Nunieh was scheduled to appear before the House of Representatives ad hoc committee set up to probe malfeasance in the commission.
Watch video below: