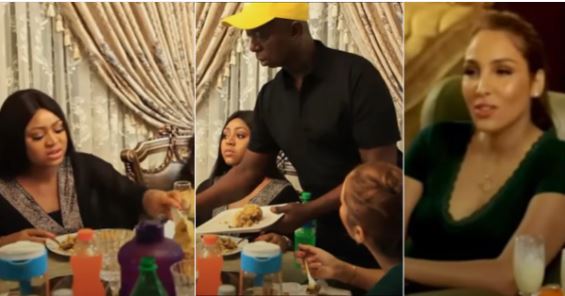 Regina Daniels visits co-wife, Laila
Nollywood actress Regina Daniels has enjoyed delicious Moroccan dish after visiting her co-wife, Laila alongside husband, Ned Nwoko.
She shared a video of the encounter after releasing a new episode of her vlog titled Family Dinner.
The actress posted the video on her Instagram page. The episode shows the large family coming together to have a family dinner.
The Ned Nwoko family had a delicious Moroccan dish and for the actress, it was her first time tasting such a foreign meal.
In the video, Regina, her co-wife Laila and the kids were spotted getting ready for the occasion. Soon, a make-up artiste came to the house to beautify the women.
The family then stepped out later in the evening to Laila's house, where they had the Moroccan delicacy. A large dining table was spotted with various foods on top as everyone took their seats.
For Regina, who is tasting the meal for the first time, she said that she has never eaten such sweet delicacy before while laughing. As soon as she said that, her billionaire husband Ned jokingly called her a bush girl and everyone laughed.
Soon, the billionaire entrepreneur was seen feeding the actress as he noted that he wanted to know how she feels about the particular meal.
The family soon finished eating and they proceeded to the living room to take photos.
Watch the video below: